The album features a wide array of remixes from artists such as Fury Weekend, Rabbit Junk, The Anix, Cyanotic, Nightfall, FreqGen, Void Chapter, Alex Yarmak, iVardensphere, Kaixo, Animattronic, Inexedra, Soul Extract, and The Last Navigator from a plethora of genres ranging from industrial, and metal to synthwave.

Dropping with the release of the album is a new hard hitting drum & bass remix of “Nothing Sacred” from sci-fi inspired artist Kaixo. 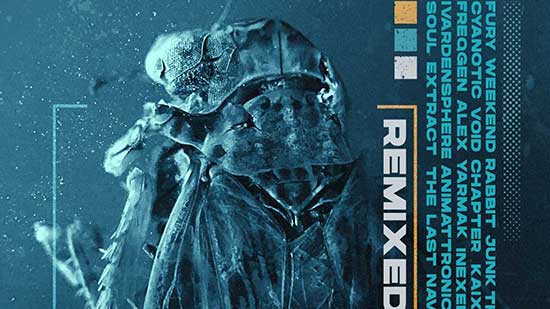 Circle of Dust made its triumphant return in 2016 after Klayton regained control of the entire Circle of Dust catalog, re-releasing each album (Self-Titled,  Brainchild, Metamorphosis, Disengage, and beloved side-project Argyle Park) with remastered audio and completely re-imagined art. Later the same year, with the project fully resurrected, the new album Machines of Our Disgrace was released followed by a feature-length documentary, Full Circle: The Birth, Death & Rebirth of Circle of Dust, and full-length remix album alt_Machines in 2018.

In 2020, Circle of Dust began releasing a 25th Anniversary Edition of the 1995 self-titled debut album, featuring all-new mixes resurrected on original gear with separate audio tracks for the first time in over 20 years. Each release from the album has received new remixes from modern artists such as Fury Weekend, Soul Extract, Rabbit Junk, Cyanotic, and FreqGen. 2021 kicked off with an updated version of “Twisted Reality” along with a cinematic remix from Void Chapter. The complete Circle Of Dust 25th Anniversary Edition was released in late 2021 followed by the Circle Of Dust (Remixed) album in early 2022.