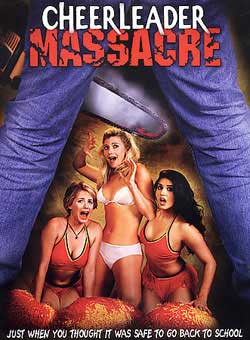 A bunch of cheerleaders (I guess. They’re never exactly dressed like cheerleaders. Strike one) a couple of guys and their hot-ass cheerleading coach get stranded in the mountains (I guess) and have to hole up in an abandoned (I guess) mountain cottage and wait to be massacred (don’t hold your breath.)

“Based on a joke once told by Jim Wynorski”

Oh yeah? Is that right? This is what the credits proudly proclaim at the end of this gem. Now, The Professor’s not sure if that’s a joke in and of itself, but the only joke I’m seeing here is Wynorski’s %$%*@ movie, Cheerleader Massacre.

You might be like me. You might love the Massacre Collection (Slumber Party and Sorority House) in all their 80’s (early 90’s), bare-breasted, drilling glory. I must be out of the loop here, because I didn’t even know they made an over-due or even more unnecessary sequel to these beauties and felt compelled to rent this nonsense. The box seemed promising. It certainly looked like an 80’s slash fest throw back, but alas dear readers, do not be fooled as I was. I feel a certain sense of duty in watching the sh*t you probably wouldn’t rent in a million years and telling you why you’re completely justified in doing just that. Maybe I’m the fool wasting my time. Either way, here I am. And reading this will save you A LOT of time in comparison, and that’s good enough for me.

You might know Wynorski’s name from some such classics as “Chopping Mall” and the “Ghoulies 4” but recently he’s been helping out 12 years olds who’s parents get skina-max with “Busty Cops,” “The Breastford Wives” and “Alabama Jones and the Busty Crusade,” which The Professor thinks should have been called “Alabama Jones and the Temple of Poon.” Just try and tell me that’s not a better title. All of those movies (with the exception of “Breatford Wives” which I haven’t seen) are awesome, in their own particular way. Even Wynorski’s own sequels in this franchise pull their weight (Sorority 2, and 3, aka Hard to Die.) What went wrong here? Answer. Everything.

This film, and I mean that in the general sense, seeing as how this looks like it was shot by your cousin on his Fisher Price PXL2000, lacks just about everything a film can possibly lack. I mean that. You rent this movie looking for what exactly? Gore? Nope not here, not even slightly. Do not pass go. Do not collect 200 dollars. Tits? Kind of, but seeing as how buxom everyone in this movie is, the actual bare titty quotient was higher at your 7th grade semi-formal. Sex? Yeah, if one scene with April Flowers licking a dude’s chest counts as sex. Seriously, go to youp*rn or P*rn hub and type in “April Flowers” and save yourself the 5 bucks and see some actual sex. So what’s left? What other possible reason could you have for renting this BFI-certified waste management situation? Story? Get real. Even if you were, (which, God help you if that’s the case) this thing doesn’t make one cubic inch of sense. Acting? Again, kill yourself if that’s true. I’ve seen better acting in a bottle of tough actin’ Tinactin. Humor? Sorry, strike 9. This movie just struck out the side. The music’s pretty fun though. Bravo Dan Savio for not even taking a break from the intensity for a sex scene. I guess that can count as a foul tip by the DH.

Lets talk about the title – the film’s first mistake. The word “massacre” should be ashamed of itself for even appearing anywhere near this movie. You give me 2 weak ass strangulations (no gore), one electrocution (no gore), a girl falling off a bridge (I guess, you never see it, no gore), one off screen something (no gore) one branch stabbing obscured by a tree (no gore), one hatchet attack (a spray of blood) a gunshot (no gore) a total stock footage car explosion off a bridge (which is pretty %$%*@ funny, but no gore) an house explosion (with, yep, no gore) and you have the %$%*@ balls to call this a “massacre?” Seriously, I saw more gore in The Spiderwick Chronicles. The goriest thing this movie has to offer is a flashback to the first Slumber Party Massacre with a nubile Brinke Stevens taking a drill to the shoulder. Are you kidding me? How can you go from video taping a haggard looking Brinke Stevens to FILMED footage, from a previous film no less, back to the same hi-8 captured Brinke Stevens and still feel good about yourself in the morning? When the coolest part of your movie is the lamest part of one of it’s predecessors, you %$%*@ something up.

Then there’s “Cheerleader,” another word that could probably use some PR assistance after it’s stint on this box cover. Cheerleaders? What? Where? If you walked into this movie a minute and a half late you wouldn’t even know that these girls were cheerleaders at all because there’s absolutely nothing hinting to this fact beyond the 2-second opening cheer they do before hitting the showers. You would also miss 1 of 2 shower scenes this %$%*@ pile has to offer. Which is exactly 1/3 of the nude scenes this movie has total. So, if that’s the case, simply discontinue use of this movie post haste.

Here’s something else I loved. Everyone in this movie totes around Co2 powered pellet guns from Wal-Mart. I’m not kidding here. I’ve bought the same ones from Wal-Mart. You’re especially not fooling anyone when we can see the little cartridge puncher sticking out of the bottom of the clip. They either didn’t give a flying %$%*@ or,…nope, no or, they just didn’t give a flying %$%*@.

There are just way too many characters fumbling through this thing. Some of them never even get killed for Christ’s sakes! What’s the point of introducing unnecessary, underdeveloped and uninteresting characters if you’re not even using them as cannon fodder? And the ones that do die don’t even have the decency to die in any way worth watching in the slightest. The cops here appear to have no training what so ever, so much so that I’m not even sure they’ve seen other fake cops faking it in other sh*tty movies. They certainly don’t have any experience operating flashlights for one, because they don’t even mention them, let alone use them. These “high school students” all have a curious amount of tattoos for children under 18. Supposedly the killer from the original is back in town sporting a pair of Freezy Freakies, but apparently it’s one of the cheerleaders that’s been killing all these people? What? Oh, and correct me if I’m wrong, but they blow up the cabin but then they drive off the next morning in an ambulance in front of the same cabin they just blew up several hours previously? Did I see that right, or am I just delirious for all sh*t being shoved up my senses? Yeah, sorry gang, you’re working on closing out a no hitter here.

I’ve seen lots of sh*tty horror movies, and most of them offer something in the way of entertainment. This picture offers negative 6 nothings in the way of anything. The only saving grace is that I had some whiskey and my brothers-in-harms way Mikey Rots and Steveo on hand, ready to laugh at each other’s jokes and trudge throw this abomination. I get by with a little help from my friends, I guess.

Do yourself and your Professor a favor, children. Rent anything else. Anything. Rent the original and the older sequels. Rent “Glitter” with Maria Carey. Rent “Can’t Stop the Music? Rent “Jungle 2 Jungle.” Rent “Rent.” I don’t care, just don’t rent this,….this thing.