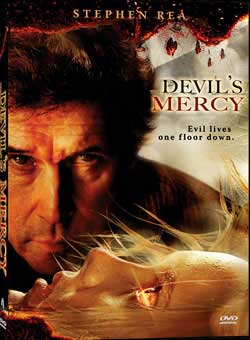 In “Devil’s Mercy,” a couple and their six-year-old son move into an old Connecticut house where the boy soon becomes distraught with thoughts of monsters dwelling in the attic. When their friends and guests abruptly go missing or die mysteriously, it becomes a race against time as the family’s lives are in peril.

Tyler (Stephen Rea) a retired older man, lives with his daughter Kayla in an old new England style home that he on occasionally restores to pass the time. From the start, we know there are devious intentions at hand as Tyler consults black magic tomes and circles a target date October end. His daughter also seems to possess limited powers that Tyler needs to aid in his goal. Though this is all we are given.

Innocently, our film begins with the posting of an available apartment space for a lucky family who happens to be driving by. It’s clear that Tyler’s intentions seem innocent at first but ramp up as the days draw near. As landlord to new tenants, he seems a bit too eager to befriend and become a part of the the new occupants lives. Especially his focus on Calvin the son to Beth and Matt Winters. As the film progresses, so does Tyler’s intentions to cause turmoil to the couples marriage, his obsession with witchcraft and a unsettling agenda that seems to be brewing.

Not content to let things lie, Beth starts investigating per way of old news clipping and some inquiries at an old local Salem museum. Further digging leads to the old tale of Samuel Warwell who supposedly sold his soul to the devil 300 years ago and must constantly deliver soul’s in exhcange for his and his daughters eternal lives.

The key to this revolves around an ancient book Tyler keeps on hand to keep track of delivered souls. The Winters just happended to be in the wrong place at the wrong time. All along suggestions are made that Tyler and Kayla both grow weary of this constant need with tension building up between the father and daughter. There intenstions are evil none-the-less and evidence becoems clearer as the film meets its final act. In a few words or less, your landlord is a warlock…..beware.

Matt plays it pretty low key while ill through most of the film. Beth becomes the true protaganist and does all the leg work while Matt lays in bed, on the couch, and occasionally gets up to check on things. Beyond that its just a matter of letting the story play out.

Our film paces pretty even, closer to a thriller film style than of a horror genre. Directed by Melanie Orr, she is no new comer to horror thrillers with a impressive list of previous titles that span over several as a script supervisor. So the progression to director seemed just a matter of time. This film though is a pretty safe film experience in the fact that there is really not much in the way of FX, brutal kills or edgy dynamics needed past the acting itself. Stephen Rea is always a pleasure to experience and brings that certain calmed intersity. The acting performances play well as a family in turmoil and a downstairs family that worships the devil.

Though really the whole devil thing is almost downplayed more to the myths of Warwell and his dreaded book. This kind of film would work better with a lighter fare audience, that seeks a thriller but wants it served more on the light side. For some reason I kept comparing it to the Lutzes in Amityville Horror, I’m not sure why. Blood is minimal, at least by today’s standards. This has rental written all over it, beyond that that’s as far as I would take it. It moves a little slow for many thrill seekers, but its got a nice base of historical lore to keep your interest. In all you’ve got yourself a solid supernatural based thriller with an interesting plot direction.