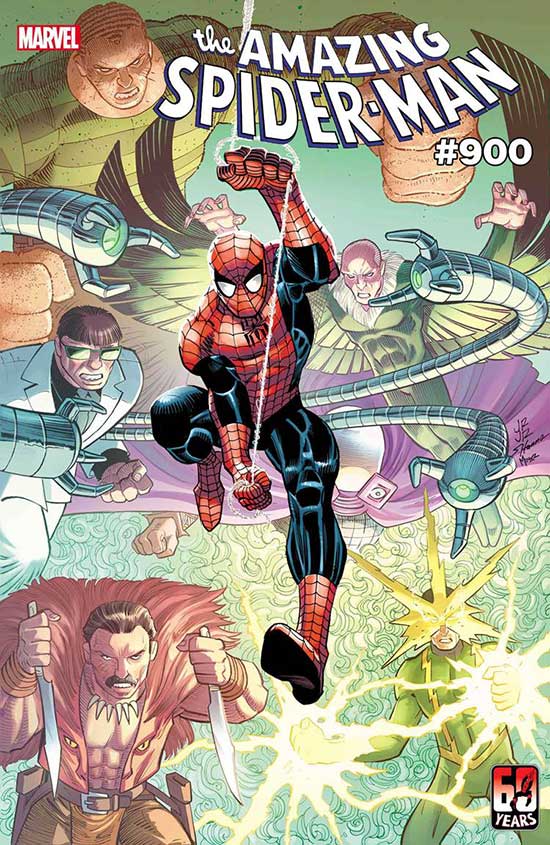 Hitting stands the same month as Spider-Man’s 60th anniversary, AMAZING SPIDER-MAN #6 will mark an incredible 900 issues of AMAZING SPIDER-MAN! The landmark issue will be a giant-sized spectacular that will see new series writer Zeb Wells teaming up with all-star artist Ed McGuinness who will bring his iconic art to the title for the first time. Taking place in the aftermath of the new run’s first arc, Peter Parker is still reeling from his brutal battle with Tombstone and now must contend with a terrifying take on the iconic SINISTER SIX!

Someone from Spider-Man’s past has captured the Sinister Six and used them to create the truly terrifying SINISTER ADAPTOID, a being equipped with the abilities of Spidey’s greatest foes: Doctor Octopus, Vulture, Kraven the Hunter, Electro, Mysterio, and Sandman. It’ll be one of the biggest adventures in Spider-History and you will not believe the ending!

“There’s nothing I love more than a giant-size Spider-Man anniversary issue, and I’m pulling out all the–ah, what does it matter what I think. ED MCGUINNESS is drawing a super-sized Spider-story. Who isn’t going to check this out???” Wells added.

“Zeb and Ed are trying to do the impossible—top Lee & Ditko’s AMAZING SPIDER-MAN #1! And that’s not the only thing that #900 has–including some shocks that are going to make you say WHAT WERE THEY THINKING?!?!” Editor Nick Lowe promised.

Be there when Wells and McGuinness pull out all the stops for AMAZING SPIDER-MAN’s 900th issue this June! For more information, visit Marvel.com.