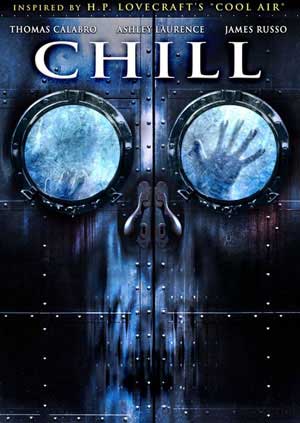 Aspiring writer Sam (Thomas Calabro) gets a job at a grocery store owned by Dr. Munoz (Shaun Kurtz), who lives in a freezer because of a mysterious skin condition. Sam learns that his boss has been dead for years, but he is surviving on the flesh harvested from his many victims. Now he must choose how loyal he wants to remain to his supervisor in this horror-thriller based on the H.P. Lovecraft story, “Cool Air.”

I think when we see the words HP lovecraft story written on the DVD we instantly get excited. Though for the record, this last year I’ve seen 4 LC based films and all them stunk. So I think viewers shouldn’t put that much weight on that simple film acknowledgment. As good of a writer he is not all HP films deliver. So here we are with another HP film, lets see what sticks?

Just off the rentals shelves I took a chance on the film by name of “Chill”. The premise is a doctor who is studying advanced medicine discovers the formula for eternal life. Though it ‘s not without consequences. He is forced to stay in freezing meat locker conditions and is also ailed with a pretty sever skin condition. Now I am getting ahead as the film actually is based in a small urban environment where a new resident writer Sam takes a job at the local mart to help pay the bills. Across the street he meets the dazzling Maria (Ashley Laurence)who he develops a relationship with. Of course not without complications. Detective Defazio is her resident stalker that can’t seem to let go after a few dates from he past. He of course try’s his best to intimidate and a the same time solve the crimes in the are of missing people. Now the Dr. Munoz is actually the mart store owner and takes an interested in Sam. Sam is introduced to his new boss who is both eccentric, brilliant and a cold blooded killer.

As things heat up, we meet a tall, deformed killer goon named ” Tor”who seems to serve the doctors wishes by killing and hanging foil ks in there meat locker. The reason? So the insane doctor can steal there skin to keep himself from deteriorating.

What’s my feeling about this film? It had its moments, and other times put me to sleep. The concept is a hodgepodge of a few similar ideas and the acting is just ok. Though to counter that statement I did enjoy the greta performance by James Russo, and the stunning Ashley Laurence (of Hellraiser fame). She is worth the price of admission alone and always a pleasure to see onscreen. James is as intimidating as ever and has a bit of that Gary Oldman feel to him at times. Director Serge Rodnunsky did an adequate job but not enough to please modern day adrenaline viewers.

I have to say the production could od used same work. While it was not totally video feeling, it still felt like the color tones and contrast could have been tightened up a bit. The lighting department seemed to be off on vacation as there was little is any mood lighting applied. There were many slow moments in the film, though there also were a few good killings. It ‘s really a movie where its best saved for a rainy day when your not too tired to stay alert thru a film. The cover art was decent, but the product was just ok. I would have liked to have seen more aggressive edits and a few more moments of intensity than what it ended up being. Also add to that a second time, more care on the look of the film for visual flair. We have moved to higher standards as viewers, so the typical SD look really is a thing of the past.

So for now, I give it a so-so response for horror-goers who want to kill some time. Maybe next time. I could of benefited more using the 2 hours of film watching on this for other things.