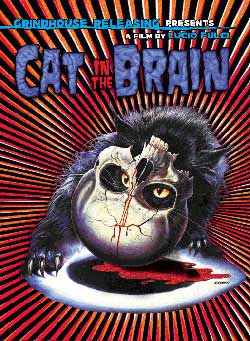 Italian horror director Lucio Fulci’s mind is his own worst nightmare in this graphically gory fright fest that gained a cult following thanks to an initial ban in the United Kingdom and one of the highest body counts in European cinema. In the midst of completing his latest masterpiece, Fulci is gripped by horrifying specters from his other films. He looks to a therapist to clear his head, but the doctor turns out to be an evil incarnate.

Directed by and played by Lucio Fulci, Cat in the Brain is a narrative surprise that fans of Lucio’s work should enjoy highly. Written on the basis of a very original idea, the film centers around Lucio the horror director. Not as a documentary but as a character in his own film. On this notion we get a play of reality and fantasy combined that is also taken advantage of in the film itself. Our character Lucio, already well established in the film making system is noted by his knack for working on several horror films back to back. This prolific nature of his begins to take its toll on his subconscious which results in a series of hallucination situations. It appears that Lucio can’t separate the illusion of real and fantasy crossing a boundary and inducing a breakdown of sorts.

He seeks out the help of a psychiatrist by the name of Professor Egon Schwarz (David L. Thompson) to try and get his grip on reality back. Unknowingly the professor who has other intentions hypnotizes Lucio and makes suggestive commands to try and control him.

While working he is seen becoming transfixed on his filmmaking while whispering commands from the set. This level of involvement and embracing takes it toll upon his psyche. This loss of psyche is introduced in the very first minutes of the film as a fake cat is shown devouring into a big slab of brain. This surprising moment is used as symbolism to reflect on the directors own loss of self. most likely used to suggest that the filmmaker is slowly eating away at his own moralities by a consummate relation with his work.

Meanwhile our professor takes on the form of a serial killer who I can only guess was influenced by Fulcis work while doing research on his films to help in his diagnosis. The becomes a point where this element of the story becomes a bit confused as to what effect the hypnotizing really had on Lucio and how it correlates with the professors madness. We can only assume that the professor just suffered from issues himself and took it upon himself to re-enact many of Fulcis’ film murders in real life. Regardless of which angle you approach this notion, the visuals have there usual stunning gory surrealness that you have come to know. When they do come, they arrive in shocking colorful ambience that sings a hymn of madness in the way that only the earlier films were able to deliver.

Cat in the Brain is filled with great Fulcism moments that are eagerly used as screen impacts to shock and awe the audience. You’ll find some common Lucio trademarks such as melting faces, gushy obscure fluids and zombie corpses. I will say that the piano wire scene is one of the most disturbing strangulation throat cutting moments I’ve seen cinematically only topped by the additional smashed head into glass scene. It’ sickly entertaining and perversely splendid. As in many of his works, there is no shortage of gratuitous nudity.

There is also no shortage of head splitting, limb slicing goodness that will satisfy any Fulci fan. While I admit to never seeing this film when it arrived in 1990, it truly is a great early classic that is clearly another reason that put Fulci on the map to so many fans.

Tags Cat in the Brain