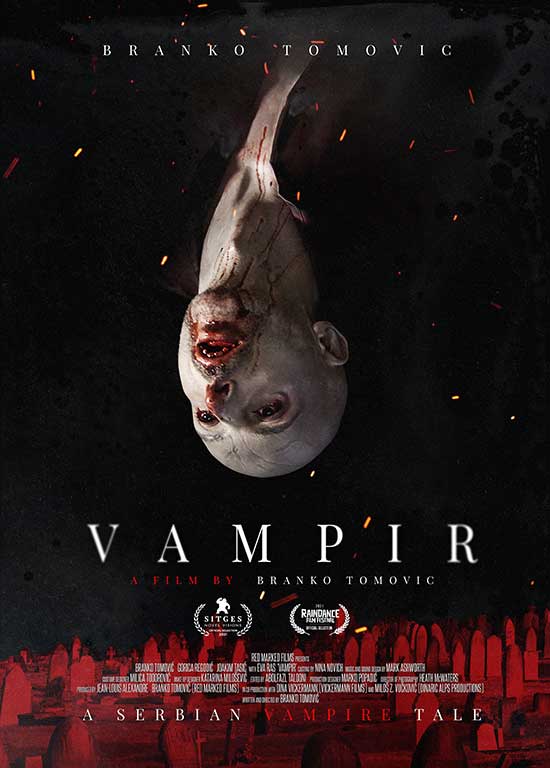 Alarm Pictures acquires Sitges folk horror Vampir by Branko Tomovic for U.S.-UK
Alarm Pictures has acquired U.S. and UK rights to Branko Tomovic’s folk horror Vampir, which world-premiered at Sitges International Film Festival, followed by Trieste Science+Fiction, Raindance and Festival of Serbian Fantastic Film in the run up to the European Film Market.
Vampir is the directorial feature debut of popular Serbian-German actor Branko Tomovic and tells the story of Arnaut, who comes from London to look after a cemetery in a small remote village in Serbia. He soon starts to have nightmarish visions and is frequently visited by the mysterious older woman Baba Draga who guides Arnaut into the darkness. Only the village priest seems to be trying to keep him safe from the sinister intentions of the villagers.
“Our film is inspired by those early myths, superstitions and folk elements that surrounded the first real vampire cases in Serbia in the early 1700s. Those were the origin of vampires, which many people don’t know. Our film is set in modern times, and I wanted to show a more mysterious side of Serbia.” says Tomović.“On another level, the film also serves as an allegory of an immigrant child who was raised abroad and comes back to his ancestors’ country, where he is confronted with the local habits, traditions and way of life, which are hard to accept at first.”
Vampir was shot primarily in English with some Serbian dialogue. It was produced by Jean-Louis Alexandre at UK’s Red Marked Films and co-produced by Milos Z. Vuckovic at Serbia’s Dinaric Alps Productions and Dina Vickermann at Germany’s Vickermann Films. The film stars Gorica Regodic, Joakim Tasic and Balkan screen legend Eva Ras.
Prior to making his feature debut with Vampir, Tomovic has starred in films by Ken Loach, Paul Greengrass, Soenke Wortmann, David Ayer and Pete Travis, among others. His acting credits include big-budget productions such as Fury, Wolfman and Bourne Ultimatum and high profile TV such as 24, Homeland and Killing Eve.
Alarm Pictures, which specialises in edgy indie and genre films is releasing Vampir on digital platforms in the U.S. and UK on May 16th 2022.
Share