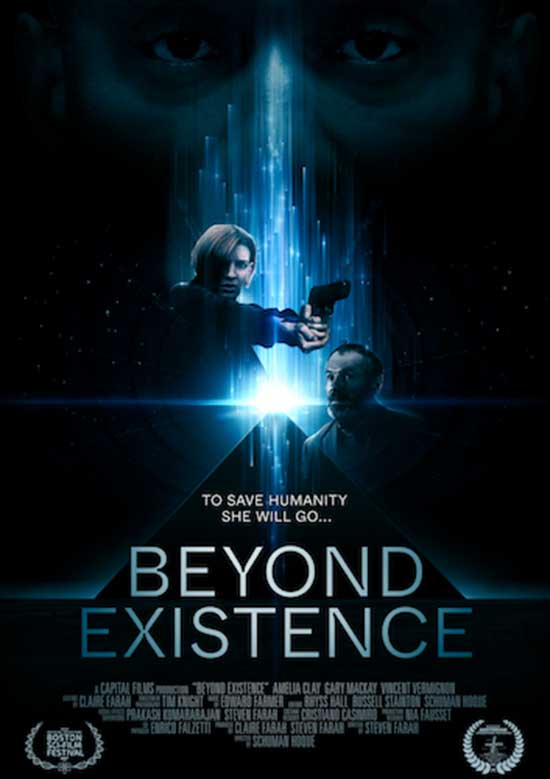 Capital Films is excited to announce that their award-winning sci-fi thriller, Beyond Existence, will be celebrating its US premiere at the Boston SciFi Film Festival in February. The premiere will be taking place virtually on Wednesday 16th February at 7pm (EST) and Beyond Existence will be available via Boston SciFi until 22nd February.

The film follows Ellen, a government agent who is forced to protect a professor who holds a deadly secret. Ellen must help The Professor evade an immortal bounty hunter in order to save the human race.
Featuring gripping performances from Amelia Clay (Human Solution, Wash), Gary MacKay (Half Moon Investigations), andPauline Turner (Peaky Blinders, T2 Trainspotting), Beyond Existence is set to have audiences glued to the screen. The film also showcases a standout performance from award-winning actor Vincent Vermignon (Cut, Luther), who is soon to be seen alongside Colin Firth and Toni Collette in HBO Max’s highly anticipated new drama ‘The Staircase‘.
Schuman Hoque’s directorial debut has already begun to garner critical acclaim, with the film bringing home Best Sci-Fi film at the Amsterdam International Film Festival.
Excited about the film’s upcoming US premiere Steven Farah of Capital Films said “With Beyond Existence we wanted to push the limits on what zero-budget filmmaking can achieve, while still having a commercially-driven and complex story. We’re beyond excited that our hard work has been recognised by Boston SciFi and to have our US premiere here”