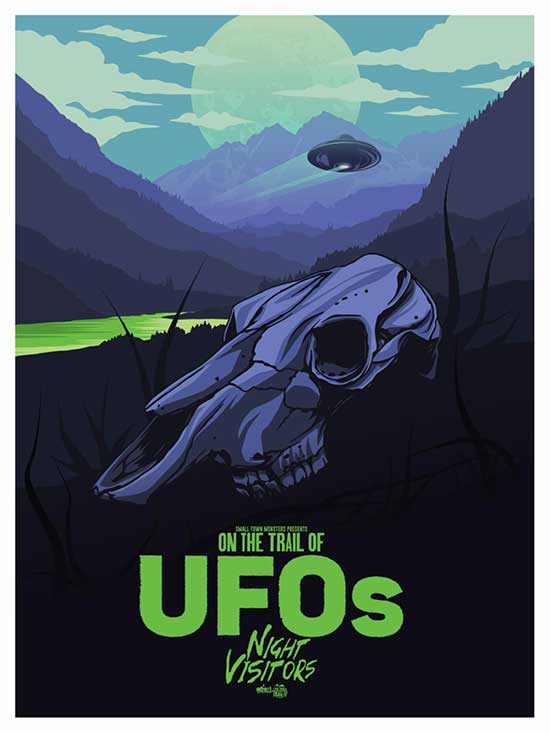 Small Town Monsters Explores the Dark Side of UFOs
First Trailer for On the Trail of UFOs: Night Visitors
Takes Viewers into the Most Disturbing Aspect of UFOlogy

Wadsworth, OH–Do cattle mutilations still plague the American West? According to the latest documentary from Small Town Monsters, the phenomenon, which was popularized through references in shows like “The X-Files” and “Unsolved Mysteries”, continues to this day. On the Trail of UFOs: Night Visitors unveils a detailed look at the ongoing UFO activity occurring across the country through interviews with investigators and eyewitnesses. The feature-length documentary promises to take viewers on a journey into a side of the subject that they’ve never explored.

Small Town Monsters has released the first-look trailer for the new film which begins to hint at some of the incredible eyewitness accounts and mind-boggling nuggets of information contained therein.

Night Visitors is the follow-up to the wildly successful 2020 miniseries, On the Trail of UFOs, and 2021’s On the Trail of UFOs: Dark Sky. The film is directed by Small Town Monsters founder Seth Breedlove and follows investigator Shannon LeGro (host of Into the Fray podcast) as she searches for answers across the stunning mountains and prairie lands of Colorado. Her search takes her deep into often-overlooked and deeply disturbing sides of the UAP topic; cattle mutilations and human abductions.

Along with the teaser, Breedlove and company have announced their film production lineup for the year which includes three additional titles: On the Trail of Bigfoot: Last Frontier, American Werewolves and Bloodlines: The Jersey Devil Curse. Bigfoot is a followup to last year’s On the Trail of Bigfoot: The Discovery which spent over 8 weeks on Amazon Vdeo’s best-selling overall titles list. American Werewolves explores the topic of upright canids in North America, while Jersey Devil seeks to blend narrative, fictional story elements with Small Town Monsters’ tried and true documentary format.
All four titles are headed to Kickstarter on February 3rd where they will be seeking funding throughout the month. A slew of rewards sure to please the UFO, paranormal or cryptid enthusiast in your life are up for grabs for backers of the campaign.
On the Trail of UFOs: Night Visitors will debut on VOD this spring.
Share