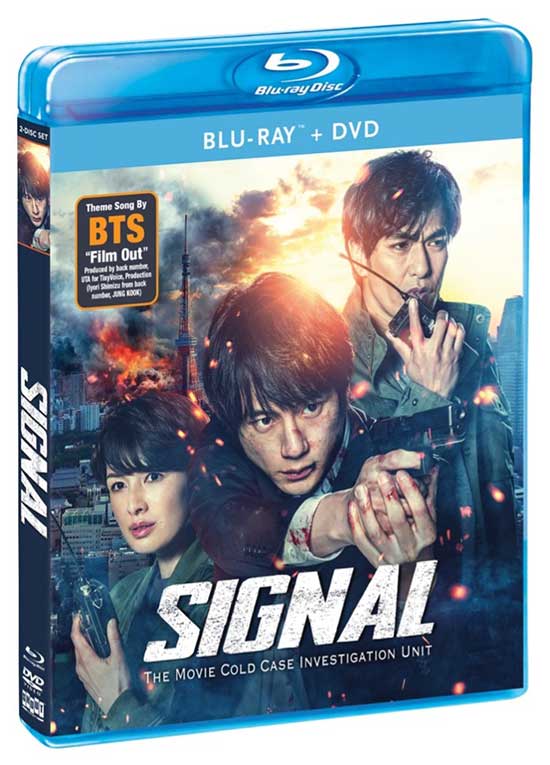 “The ensuing action is staged with panache and impact.”

The long-awaited feature film adaption of the popular Japanese crime series and based on the acclaimed South Korean masterpiece drama, SIGNAL THE MOVIE COLD CASE INVESTIGATION UNIT will be released on Blu-ray+DVD combo pack and digital download on March 15, 2022 from Eleven Arts and Shout! Factory. Directed by renowned filmmaker Hajime Hashimoto (Detective in the Bar, Aibou:The Movie IV), SIGNAL is a masterfully crafted suspense thriller that combines stylish visuals, captivating narrative, and edge-of-your-seat action in equal measures. The film features the movie theme song “Film Out” by international K-Pop sensation BTS. The song was written by BTS member Jungkook, in collaboration with the lead vocalist of Japanese rock band back number, Iyori Shimizu, and produced by back number and UTA for Tiny Voice Production.

Available for the first time in North America, the highly collectible SIGNAL THE MOVIE COLD CASE INVESTIGATION UNIT Blu-ray+DVD combo pack boasts an exciting, action-packed movie presentation. A must-own for BTS fans, movie collectors, and pop culture enthusiasts, SIGNAL is available for pre-order now at ShoutFactory.com and will be available in stores and other fine retailers.

When officer Kento Saegusa (Kentaro Sakaguchi) picks up a dusty old police radio that’s about to be scrapped, it brings him into contact with Takeshi Oyama (Kazuki Kitamura). The two detectives, one from the past and one from the present, have worked together to solve countless cold cases. Now they’re back together once more!

Tokyo, 2021. A high-ranking government official is killed when his chauffeur loses control on an expressway. Saegusa suspects it was far from accidental. Meanwhile in 2009, parliamentary officials are dying in a succession of fatal car crashes. While the police write them off as accidents, Oyama is the only one convinced of foul play.

This time, Saegusa and Oyama are forced to go up against corruption in their own home: the police force. Will they finally reunite in the present?