Enter the spirit world with Words of The Dead

WORDS OF THE DEAD 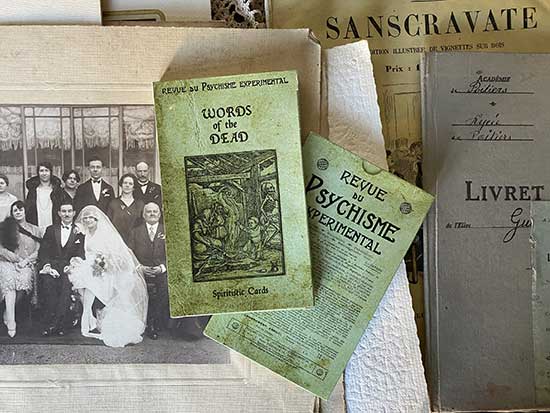 Enter the spirit world! Talk to the dead and read minds with a staggering haunted card game, bizarre magic trick and divination tool.

At the end of the 19th century, the French magazine « Revue du Psychisme Experimental » published a special issue with a set of spiritistic cards entitled Les 100 Mots du Diable. The journal released an English version in 1897 : Words of the Dead. Copies were extremely rare and for good reason. These 10 cards were used to communicate with the Dead.

EASY TO PERFORM, ACCESSIBLE TO ALL!

A spectator spreads the 10 cards on the table, each listing 10 words related to the occult. Ask the spectator to use the coffin nail as a pendullum and to secretly choose a word on one of the cards. The spectator then turns over the cards and looks for his word. The ghosts are talking to you, they can enter the spectator’s head and tell you the chosen word! Spectators can shuffle the deck of cards at any time, even before the performance. Once you know the trick, you can even do it to several spectators at the same time!

This limited replica is the ultimate divination tool, it comes with a real coffin nail from the 19th century. This nail can be used as a pendulum or as a planchette during a seance. You can also use Words of the Dead as a magic trick. Your spectators will be amazed when they see that ghosts are whispering to your ears. You guess, in the blink of an eye, the word a spectator secretly chose among 100 different words! The cards hide a diabolical secret.

If Words of the Dead is a formidable magic trick for mentalists and bizarre magic performers, it’s also a real divination tool. It can be used to ask questions to the dead between two Ouija board sessions. If the place is truly haunted, if ghosts are moving the planchette, it is quite possible they move the nail too. Participants can touch the rusty nail and let it move on the cards to designate a word. The nail could also move by itself. Words of the Dead has been used in Fougeret, France’s most haunted castle, and the results were very disturbing. Whether or not you are a medium, this tool will be your best friend when it comes to communicate with the dead. Take it everywhere with you and enter the world of ghosts.