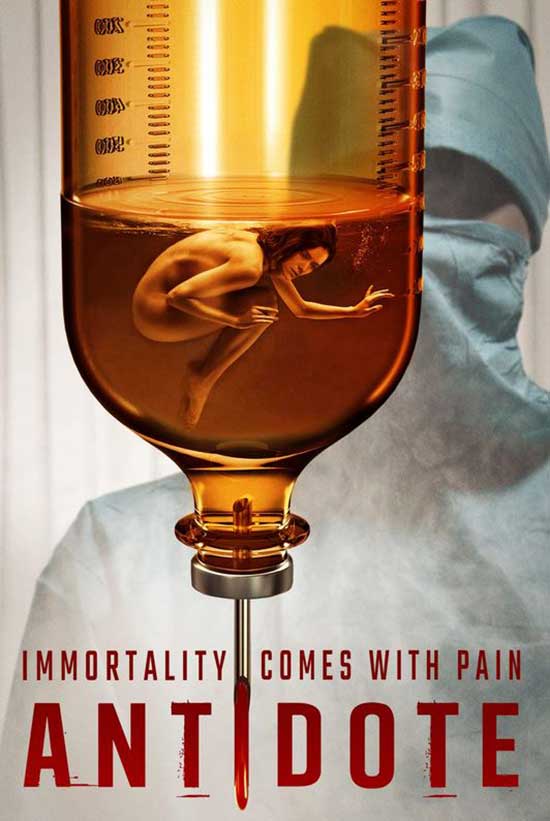 A young woman is held captive in an underground medical facility where selected individuals are perpetually mutilated and then healed using a secret Antidote.

“Antidote” opens with a casual drone-shot of a modern city. The view floats along as credits roll. So soothing and generic. It could be your city. It could be mine. Any City, USA.

The camera slows then closes in on a brightly-lit window of a building. We are led into a room with a blood-covered guy hanging from copper tubing as a grand piano attempts to act nonchalant at his side. Once more, failure to correctly navigate “Chopsticks” has apparently claimed another life. Euphemia Allen strikes from beyond the grave again!!!

Just kidding! There is a dead guy and a piano, though. Tuck that away as it will not mean much for another 35 minutes or more.

Fade to a bedroom. The sounds of a woman moaning. Cool your jets, folks. It isn’t funky sex you’re hearing. Sharyn, our main character, is in pain. Acute appendicitis with likely rupturing. At the hospital, she is informed the staff will do emergency surgery. After the camera lingers on her wedding ring, she is put under anesthetic, and everything fades to black.

When she awakes, Sharyn finds herself in a dingy room where she is restrained to a hospital bed from the 50s or 60s. She is receiving a drip feed of amber fluid. As she begins to panic, a doctor she does not know enters and removes the shackles as he explains there were complications during the surgery. She is currently under observation.

The doctor now in charge of her case? Hellenbach. There is the first HUGE clue. Just pronounce the syllables of the name slowly.

Sharyn has a nearly healed scar from the surgery. That seems impossible. The doctor assures her that the wound is nearly healed due to the liquid entering her through I.V. To save her life, an experimental treatment that promotes rapid healing had been used.

Unfortunately, poor Sharyn is now part of a very special group of patients. They are repeatedly maimed in various ways, including dismemberment, glossectomy (doctor got your tongue, mate?), and full-body immolation. Afterwards, the experimental “antidote” returns them to their original state. These horrific experiments are repeated over and over.

For the next hour, Sharyn attempts to understand where she is, how to escape, and why is Hellenbach so interested in any dark secrets she may have in her past, and the viewer is along for trip.

“Antidote” has a mildly interesting premise with visuals that harken back to the “Eye of the Beholder” episode of the original “Twilight Zone” series. A woman in a hospital. Confusion as to why she is there. Masked doctors and staff who exude an air of malevolence.  Blend in hallways that are maddeningly identical except for room numbers, and the movie takes on the air of those frustrating stress dreams that have you repeating the same actions endlessly until you wake up soaked in sweat. These elements were featured in the film’s trailer and are the primary factors to keep the audience watching.

Viewers who are paying attention will figure out the “secret” long before any of the characters do. In fact, you may have it pegged before the film begins shoehorning in past events as a way to “build” to a reveal that is telegraphed by the doctor’s last name. Once the proverbial cat is out of the bag, story wise, “Antidote” rushes headlong into a resolution that feels like the writers could not be bothered with crafting either something darker or fully satisfying.

Acting in “Antidote” varies. The lead actress, Ashlynn Yennie is appealing yet generic Everywoman type in a role that allows for maybe two basic reactions: confusion and/or anger. On the lowest end of the performances, Alexi Stavrou plays the resident mental patient as an eye-rolling, tongue-wagging loon, but this is most likely an issue with the writing. At the top of the heap is Louis Mandylor in the role of Dr. Hellenbach, which he plays with almost machine-like efficiency and coldness, creating a character who deserves his own film.

“Antidote” remains watchable throughout, even when the truth of Sharyn’s situation is clear early on and the resolution may have you rolling your eyes. Not a film to go out of your way to see, but better this than some of the other recent releases on the market if you just HAVE to watch another horror movie.