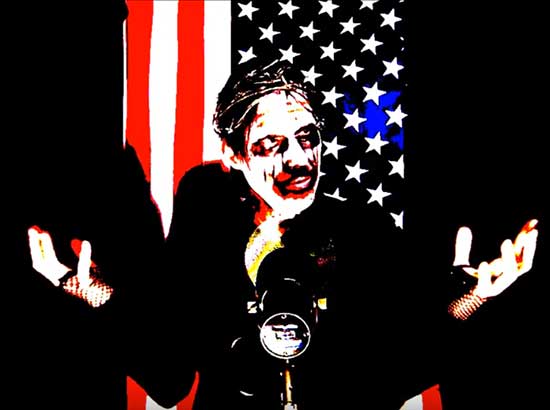 Canadian industrial act, DI AUGER has just unleashed their new video, a commentary on world-wide geopolitical issues called “Brave New World”. The concept for the “Brave New World” video was designed to capture the literal content of the song.

The  message in the song is this: We are one people, one race and we exist to perpetually destroy ourselves and erase our existence from this planet. The song closes with the sarcastic view of our new collective mindfulness. Prove me and the next generation wrong.

Fighting racism, climate change, pollution, overpopulation, human rights. Where has it gotten us?  We are reliving the past here and now. The ideology is the same as are the reactions and the emotions.

Now we live in this brave new world; one with its promises for salvation under a unified umbrella as long as YOU stay in line and do what the government tells you. OBEY and don’t criticize, or comment, make a fuss or subjectively analyze.

“Brave New World” appears on the album, Under The Skin Of The World and is available digitally NOW.

DI AUGER is the solo artist, C. Lefort, (Toronto, Canada), that has created a movement of aggressive but melodic music that encompasses several genres yet, has established itself in a self-created foundation called “Neo Industrial Gothic Rock”. For the past several years DI AUGER has cultivated and developed his persona as an independent artist, the result of which is a discography consisting of six full-length albums, over six EP’s, as well as various remixes, singles and collaborations.

DI AUGER, a formerly educated pianist and percussionist also hosts and DJ’s events in the city Toronto under his banner “RAGE”, and has worked with many of leading players in that field. He produces DI AUGER‘s RAGECAST, a monthly podcast that brings new music, old favorites and aspiring talent into the fold for two hours of dark dance in a streaming environment. DI AUGER’S talents not only exist within the realm of music creation, song-writing, or performing. He is also an award winning visual artist, designs and creates album covers, original fine artwork and merchandise under his moniker OCCULTURE CREATIONS. He has built a grass roots following in the Gothic/Industrial scene in Toronto and is on the cusp of expanding his network to a worldwide market.