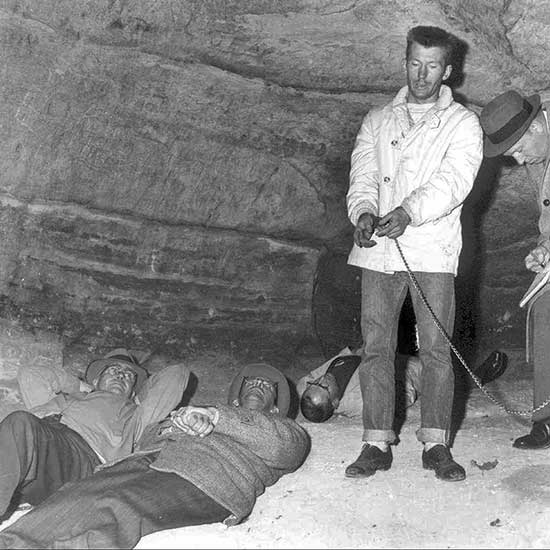 HBO documentary series, THE MURDERS AT STARVED ROCK, exploring the 1960 brutal murders of three women at Starved Rock State Park in LaSalle, Illinois and the decades of questions and doubts left in their wake, debuts with the first two episodes back-to-back TUESDAY, DECEMBER 14 (8:00-10:00 p.m. ET/PT) and concludes with the final episode Wednesday, December 15 at (8:00-9:00 p.m. ET/PT). From the producers of “McMillion$,” the three-part documentary series will air on HBO and will be available to stream on HBO Max.

Directed by Jody McVeigh-Schultz and produced by Mark Wahlberg’s Unrealistic Ideas, THE MURDERS AT STARVED ROCK explores this 60-year-old murder mystery. The convicted killer, Chester Weger, maintains his innocence after sixty years in prison and seeks exoneration. Haunted by the murders in his hometown, David Raccuglia has spent the last 15 years delving into the case files, convinced that the whole truth has yet to be uncovered. As a child growing up in LaSalle, David lived in fear of Weger, who was characterized as the local “bogeyman.” Further complicating David’s search for answers is the role his own father played in the trial; Anthony Raccuglia was the determined, young prosecutor who put Weger behind bars, believing steadfastly in his guilt. With a complicated father/son relationship at its core, THE MURDERS AT STARVED ROCK traces a twisting path of inconsistencies, cover-ups and lies, unearthing new clues and potential suspects while questioning the very nature and reliability of memory.

The horrific slaying of three middle-aged mothers found in a picturesque canyon of the park lingers in the fabric of LaSalle, a rural town where opinions are strong and rumors spread like wildfire, with townsfolk starkly divided as to the guilt of Chester Weger. THE MURDERS AT STARVED ROCK unfolds from David’s shifting perspective over recent years as his quest for the truth puts him in direct conflict with his father’s intractable belief in the justice system. David’s curiosity leads him down a rabbit-hole of conflicting theories, alleged police misconduct, and legal grey areas.

At the heart of THE MURDERS AT STARVED ROCK is David’s tension-filled interview with his late father that speaks to the divisive feelings that the case still engenders. Hard-boiled investigators, local reporters, family members and eccentric townsfolk, each with their own theories, also lend their insight to the series and a wealth of archival materials transports us back to 1960. Several interviews with Weger himself reveal a sympathetic man steadfast in his claims of innocence, but is he an unreliable narrator of his own story?

THE MURDERS AT STARVED ROCK is a probing investigation into a sixty-year-old crime clouded by the passage of time, the vagaries of memory and ever-shifting perceptions. As the multifaceted series explores the far-reaching shockwaves of the murders and uncovers long buried clues, David remains consumed by a central mystery: is the real Chester Weger a monster or a martyr? Did his father help convict an innocent man?