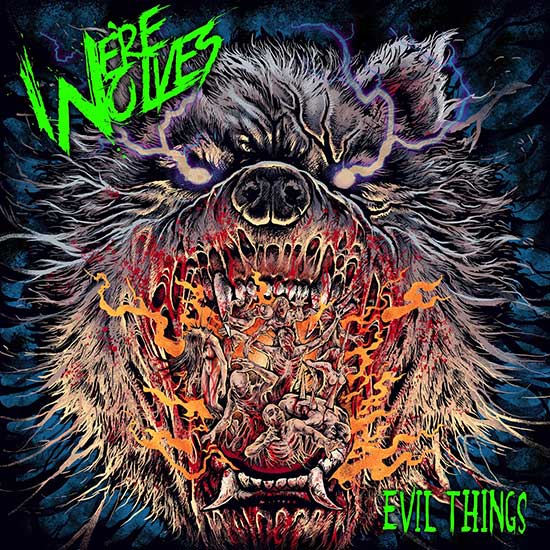 Stay up to date with We’re Wolves HERE

“The time has finally come, years of hard work and heartache went into the creation of this album. I’m overwhelmed with emotions, mainly excitement, for the world to finally hear what we created as a team. I’m beyond proud of this album. It was as much of a wild ride working on the album, as it is a wild ride to listen to. I hope you all fall in love with it as much as we have. Welcome to the personal hell that is Evil Things.” – AJ Diaferio, Vocalist of We’re Wolves

We’re Wolves is a dark-humored, horror-loving, energetic blend of metal subgenres and hard rock. The band is constantly pushing the boundaries of entertainment through satirical yet theatrically-morbid visuals that play off of their carefully crafted aggressive sound. We’re Wolves have conceived their first full-length album Evil Things, a diverse collection of songs designed to connect to the sinner in all of us. Based on Dante’s Divine Comedy, the album takes the listener on a sonic and lyrics journey through the underworld of Hell. Forged in the fires of the inferno, Evil Things delivers a ground-shattering debut for We’re Wolves. The album also contains features from Bryan Kuznitz of Fame On Fire and Spencer Charnas of Ice Nine Kills.

We’re Wolves first burst on to the music scene with their cover of Limp Bizkit’s “Break Stuff,” which garnered a huge response for the band, with over 1.6 Million views on YouTube, and 675K streams on Spotify. Their debut single, “Dissonance,” off their EP The Hunger reached over 400k streams landing the band on the Spotify editorial “New Core” playlist. The band has continued to please fans of metal and horror alike with their cover of “Bodies” by Drowning Pool being featured on Spotify’s “Metal Covers” playlist, and the cover of Disturbed’s “Down With The Sickness” has been revered by the original band themselves. Answering the call for new original music and covers alike, We’re Wolves’ self-released debut full-length, Evil Things came out on October 22nd. As the album release day creeped closer, the band garnered buzz from revered publications including Loudwire, Revolver Magazine, Outburn Magazine, and more. They are set to appear at Florida’s most coveted horror convention, Spooky Empire, on October 23rd following the album release.