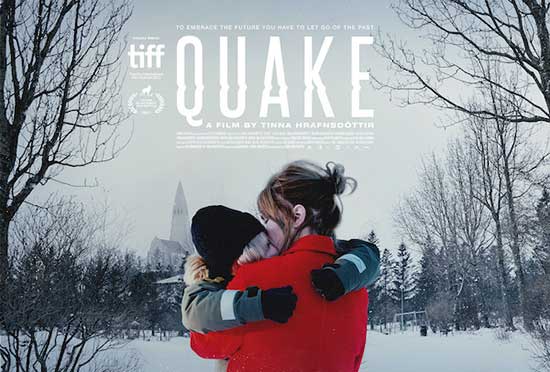 Ursus Parvus have released the poster and trailer for Icelandic haunting mystery title Quake, which will have its World Premiere (November 20th) at Tallinn Black Nights Film Festival (PÖFF).

Based on the best-selling novel, Grand Mal/ Quake: A Novel, by Audur Jonsdóttir, which was nominated for the Icelandic Literary prize and picked out by Toronto International Film Festival as one of their 2021 Industry Selects, Quake stars Anita Briem (Journey to the Centre of the Earth, The Minister), Edda Björgvinsdóttir (Under the tree, The Valhalla Murders) and is written and directed by Tinna Hrafnsdóttir (Margrete – Queen of the North, Valhalla Murders, The Minister), and produced by Hlín Jóhannesdóttir of Ursus Parvus.

Quake follows Saga (Briem), a single mother in her late thirties, who gets hit by a fierce epileptic attack walking in a public park with her six-year-old son resulting in a total memory loss. Afraid of being considered unable to take care of her son, Saga attempts to hide her state from others and occupies herself digging for the answers she needs. As she struggles to gather bits and pieces from her forgotten life, repressed memories that Saga unconsciously blocked as a child suddenly start to come back, revealing a painful truth about herself and the past.

Quake is a shocking and revelatory exploration of the blurred lines between fact and fiction, reality and imagination, and where mother ends and child begins.

Quake will have its World Premiere at Tallinn Black Nights Film Festival on November 20th and be released in Iceland in January 2022.