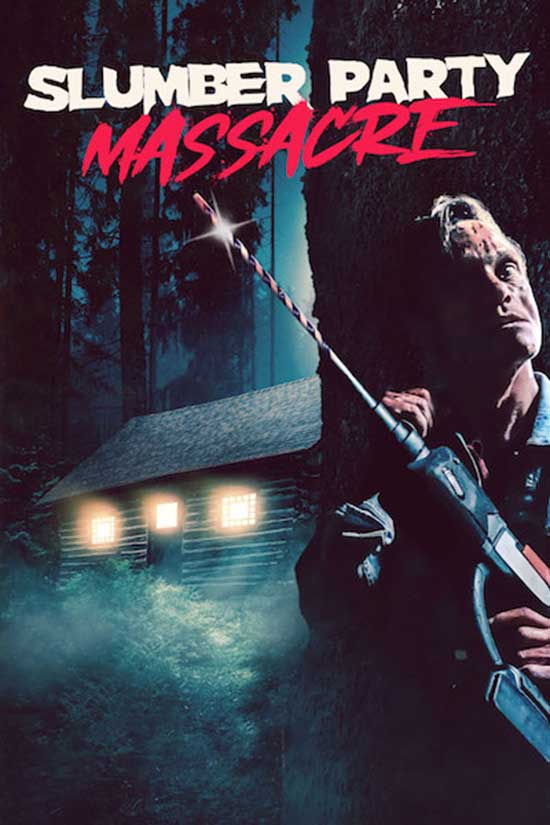 Lightbulb Film Distribution are delighted to share the poster and trailer for new horror feature, Slumber Party Massacre. Featuring an all-female principle cast, this feminist reimagining of Roger Corman’s 1982 cult-classic is smashing the glass ceiling. Slumber Party Massacre will be released on Digital Download on 13th December and  DVD from 10th January. The film had its UK Premiere at Abertoir Horror Festival in November and has also been selected as the closing film of Soho Horror Festival.
Written by Suzanne Keilly (Warrior Nun, Ash vs Evil Dead) and directed by Danishka Esterhazy (The Banana Splits Movie), the film stars Hannah Gonera (Spell, Jamillah and Aladdin), Frances Sholto-Douglas (The Kissing Booth, Black Mirror), and Alex McGregor (Searchers, Blood Drive).
A slumber party turns into a bloodbath when a psychopath wielding a power-drill disrupts the fun. There really is no rest for the wicked at this slumber party…
Commenting on the release, Peter Thompson, Sales & Acquisitions Director at Lightbulb Film Distribution, said: “We are thrilled to be bringing this iconic slasher remake to audiences in the UK and Ireland. Esterhazy manages to bring a fresh perspective to this horror sub-genre, whilst capturing the essence of the much-loved original. She is an exceptional filmmaker. Gore, jumps and laughs – Slumber Party Massacre has it all.
Share