Sequel to 2014 Hit “Wyrmwood: Road of the Dead” is set for US release in 2022; International Sales Minus Australia will continue at AFM 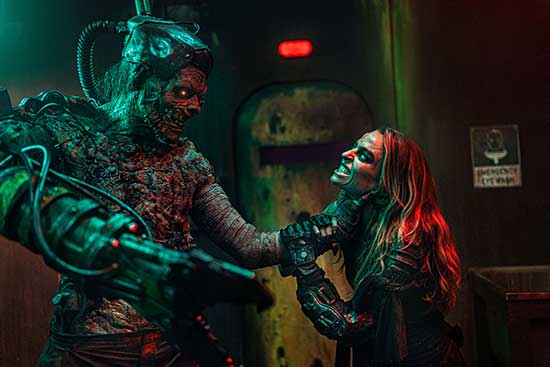 XYZ Films has acquired all rights minus Australia for global distribution to the zombie action thriller WYRMWOOD: APOCALYPSE and will set a US release date for 2022 through their new domestic distribution division. The film is the sequel to the hit 2014 Australian horror film WYRMWOOD: ROAD OF THE DEAD and is directed by Kiah Roache-Turner, written by Kiah and Tristan Roache-Turner, and was produced by Bronte Pictures, Guerilla Films, Tristan Roache-Turner and Blake Northfield. The cast includes Luke McKenzie (“Wentworth”), Goran D. Kleut (ALIEN: COVENANT, HACKSAW RIDGE), Bianca Bradey and Shantae Barnes-Cowan. The film will be one of XYZ’s first releases since launching its North American distribution division.  US distribution EVP James Emanuel Shapiro will work closely with XYZ President of Int’l Sales & Distribution Tatyana Joffe to architect the worldwide release. Australian release will go out through Studio Canal in 2022 as well.

The film follows the story of a soldier in a zombie-infested Australian wasteland who has dedicated his life to tracking and capturing survivors for the Surgeon General in hopes of finding a cure.

The original film WYRMWOOD: ROAD OF THE DEAD premiered at Fantastic Fest in 2014 and was a critical and audience favorite.

“As soon as our head of international acquisitions Todd Brown sent word this film was available, I had to have it. Its non-stop from the opening frame to the explosive last frame. We are tremendously excited to work on this film and want to make sure genre audiences know that not every horror film these days is sad and depressing. This film will make zombies fun again!” said James Emanuel Shapiro, EVP of XYZ Films distribution label.

“The crew at XYZ are unquestionably our favorite people in the business. They were among the first to believe in us back when we released our debut film, they did a cracking job launching it and have remained our good friends to this day. Having them jump back onboard with Wyrmwood Apocalypse honestly felt like coming home. They are the best at what they do, always super passionate and, most importantly, they make filmmaking fun again,” said Kiah and Tristan Roache-Turner.

“XYZ is one of the best International Sales companies in the world. Their exciting, edgy model and the recent hiring of James Shapiro brings them straight to the top in the North American distribution market. To have them represent this film provides us with a piece of mind the film is in great hands, we are absolutely thrilled with the acquisition,” said Bronte’s Blake Northfield.

The rights deal was negotiated by XYZ’s Vice President, Finance & Production Maxime Cottray and James Emanuel Shapiro and by Blake Northfield and Tristan Roache-Turner on behalf of the filmmakers.

Upcoming XYZ Film releases include the latest sci-fi mind-bender from Justin Benson and Aaron Moorhead, SOMETHING IN THE DIRT.