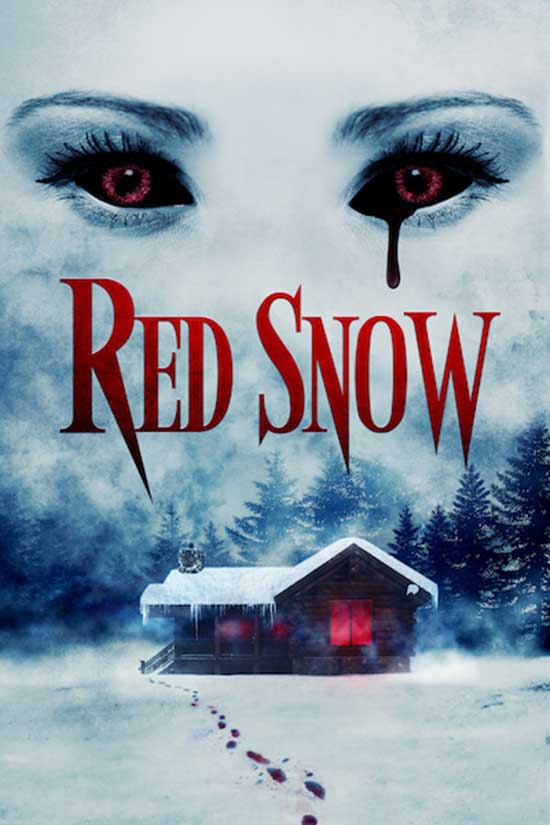 Central City Media is excited to share the poster and trailer for new comedy horror thriller, Red Snow. Fear not, this vampire-filled comedy horror will provide plenty to sink your teeth into as it comes to Digital Download on 6th December.
Written and directed by Sean Nichols Lynch (Prep School), the film stars Dennice Cisneros (Exile, NCIS), Nico Bellamy (Boy and Girl, The Way of the Iron Buffalo), Laura Kennon (Prime, Escalate), Vernon Wells (Commando, Mad Max 2), Alan Silva (Fist of the Vagabond, Acceleration), Edward Ewell (The Lepers), & Olivia Pintz (Lil Peep : Life is Beautiful, The Alternate).
Aspiring vampire-romance novelist Olivia Romo is spending her holidays alone, holed up in her snowbound cabin near Lake Tahoe and racking up rejection letters from publishers. Until one night, an injured bat slams against her window. Sympathetic to creatures of the night, Olivia takes the wounded critter inside her garage to nurse it back to health.
The next day, however, Olivia is delighted to discover that the bat has transformed into a handsome vampire. His name is Luke. He’s not a fan of crosses, garlic, or sunlight, but he seems to take a strange liking to Olivia.
The unlikely companions get to know each other and start to form a tenuous friendship, but Olivia grows suspicious of Luke’s intentions as his past begins to catch up with him. First, there’s the strange detective who comes looking for Luke and his dangerous associates. Then, there’s the pale figures creeping outside Olivia’s cabin at night.
And at last, Luke’s old vampire friends come out of the shadows and into Olivia’s cabin. They want Luke back, but first they want to help themselves to his tasty new friend..
Share