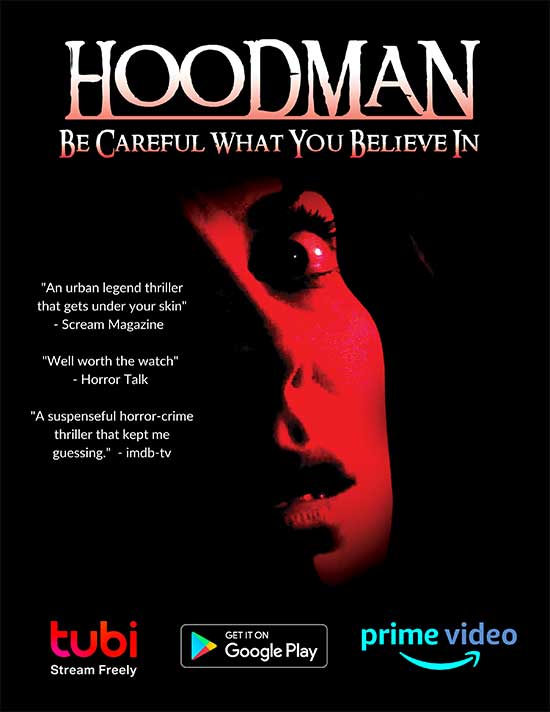 Nightwatcher Films and Indie Rights Film Distribution announce the worldwide release of the feature film ‘Hoodman ‘ on all major streaming platforms. Hoodman’ is a suspense-crime-thriller in the horror genre. It stars Madison Spear and Brock Morse and made its debut at the Cannes Film Festival in the Spring 2021. ‘Hoodman’ saw its initial release on Amazon Prime’s Subscription TV Service on May 1, 2021, garnering largely positive reviews.
‘Hoodman’ is the story of a troubled young woman [Madison Spear] who seeks to find her missing child as an urban legend haunts her small town. A relentless detective [Brock Morse] pieces together clues that lead them both to a suspected killer [Jack James]. As the mystery unfolds so does the frightening realization that the urban legend is real.
In addition to Amazon Prime, ‘Hoodman’ now appears on major streaming platforms worldwide to include Fox’s TUBI-TV, Google Play, IMDB-TV, The YouTube Movie Channel and the Indie Rights Movie Channel. All are advertising-driven streaming platforms known as AVOD, with the exception of Amazon Prime, which is a subscription-based platform also reachable from Amazon’s own Fire-TV service.
‘Hoodman’ is the second feature film written and directed by Hollywood-based indie filmmaker Mark W. Curran under his Nightwatcher Films moniker. His first film, ‘Abandoned Dead,’ starring Sarah Nicklin and Night of the Living Dead’s Judith O’Dea was initially distributed through Gravitas Releasing and enjoyed a 6-year run on US and Canadian PPV-cable before being signed by Los Angeles-based film distributor Indie Rights.
“We are thrilled to have Mark W. Curran as part of the Indie Rights filmmaker family,” states Indie Rights President and CEO Linda Nelson, “we look forward to a long and prosperous relationship bringing more of his excellent quality films to the marketplace.”
Share