Home | News | YOU Can Own ALL RIGHTS to Lloyd Kaufman’s First Ever Film, The Battle Of Love’s Return!

YOU Can Own ALL RIGHTS to Lloyd Kaufman’s First Ever Film, The Battle Of Love’s Return!

This is the opportunity of a lifetime! Independent Film Legend, Troma Entertainment President, and creator of The Toxic Avenger, Lloyd Kaufman’s very first feature film to play in theatres, 1971’s THE BATTLE OF LOVE’S RETURN has been memorialized in this exclusive NTF, which will include OUTRIGHT OWNERSHIP OF THE FILM!

You read that correctly: the (winning bidder/ purchaser) will be granted all rights, title, and interest in and to THE BATTLE OF LOVE’S RETURN including the original negative and sound materials. 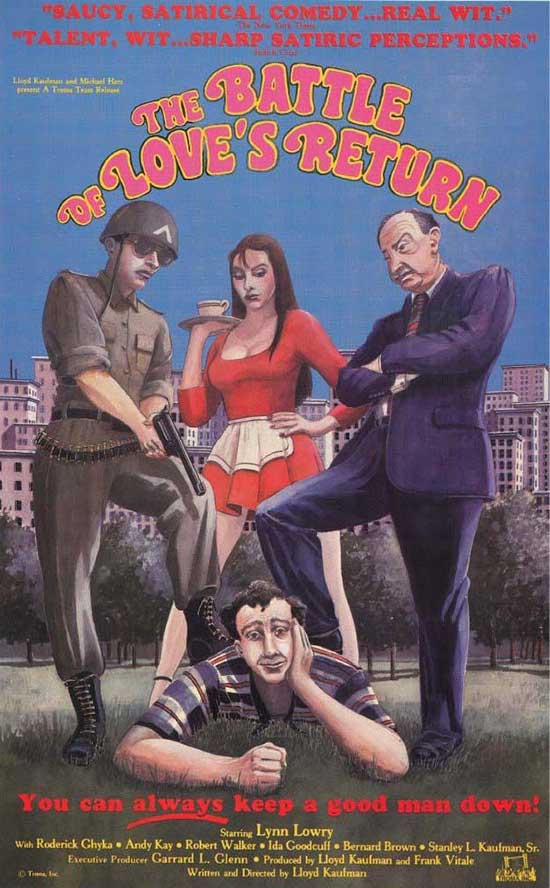 This is a piece of cinematic history, as it is the first motion picture made by the acclaimed and influential director, Lloyd Kaufman. Oliver Stone and Lynn Lowery are featured in THE BATTLE OF LOVE’S RETURN, as well as Lloyd himself along with the incomparable Stanley Kaufman (Lloyd’s Dad), in a tour de force performance.

Future director Allan Moyle also worked on the film as an Assistant Director. The film was favorably reviewed by Howard Thompson of the New York Times who stated, “Lloyd Kaufman, who made the picture and plays the lead, proves in his commercial venture that he has enough talent to go places”. Judith Crist of New York Magazine, compared Kaufman to Woody Allen and Mel Brooks.

The worst review, however, came from Kaufman’s father: when asked what his favorite part of the film was, he responded “the part where Lloyd gets killed”.

Lloyd Kaufman would probably be furious that we are selling this piece of movie history, but he’s 75 years old and going senile, so he probably doesn’t even remember making the film.