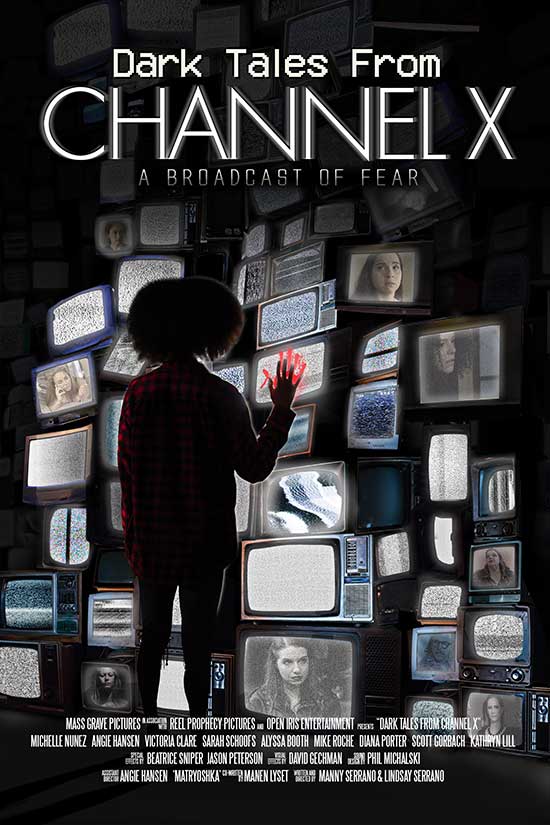 Mass Grave Pictures announced that their newest film, DARK TALES FROM CHANNEL X will have its New York Premiere on November 7th at the Buffalo Dreams Fantastic Film Festival.

DARK TALES FROM CHANNEL X is a horror anthology, co-directed by Manny Serrano and Lindsay Serrano, starring Michelle Nuñez (Zane from Tyler Perry’s RUTHLESS series) as Cassie who finds an old TV set in the basement of the home she’s snooping around in, which then turns itself on to unleash seven horror tales involving cursed dolls, stalkers, and an intense body-horror story that will test the comfort level of even the most seasoned of horror fans.

Among others in the film are northeast horror mainstays Angie Hansen (THE BLOODY NUN), Diana Porter (SHEVENGE), Deana Demko (THETA STATES), Sarah Schoofs (GUT), Heather Drew (THE THEATRE OF TERROR), Patrick Devaney (in an uncredited role as the TV’s masked host ‘The Viewer’), and a cameo by Harry Scott Sullivan of the decade-old podcast DEATH BY DVD. Featuring music from L.A.-based industrial band MOJAVE PHONE BOOTH, as well as score by THE NOSLEEP PODCAST composer Brandon Boone, and includes the teams multi award-winning short films BENEATH, I WAITED FOR YOU, and MATRYOSHKA, co-written by regular THE NOSLEEP PODCAST writer Manen Lyset.

“Buffalo Dreams is one festival that has been on our radar for a number of years,” says co-director Manny Serrano, “and I’m excited for it to be our New York premiere. We finished shooting in late 2019 and COVID really derailed a lot of the post-production work on it, so we’re just happy to finally have an opportunity to screen live in front of an audience in New York again.”
Buffalo Dreams Fantastic Film Festival, in its 8th year, will also feature the 40th Anniversary screening of ‘Fear No Evil’ and ‘New York Ninja’. Full schedule can be found here: www.buffalodreamsfantasticfilmfestival.com/2021-schedule/