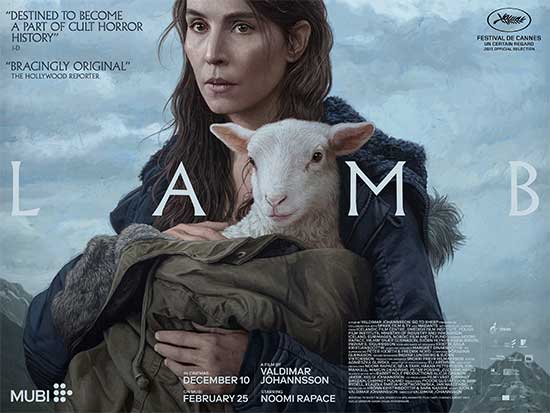 MUBI, the theatrical distributor and global curated film streaming service have released the new trailer and poster for Valdimar Jóhannsson’s striking debut feature film Lamb, which will be released in cinemas in the UK and Ireland on 10 December 2021 and exclusively on MUBI from 25 February 2022.

Lamb premiered in Un Certain Regard at Cannes 2021 and won the Prize of Originality. This darkly compelling fable tells the story of a couple, María (Noomi Rapace) and Ingvar (Hilmir Snaer Gudnason) on a remote farm in rural Iceland, who find their quiet existence shaken by the astonishing discovery of a mysterious newborn amongst their sheep. They decide to raise the child as their own, but soon face the consequences of defying the will of nature. An audacious, genre-defying mix of horror and folklore, Lamb is truly like nothing you have ever seen before.

Lamb was recently released by A24 in North America and after opening weekend, became the all-time highest debut by an Icelandic film in the US.