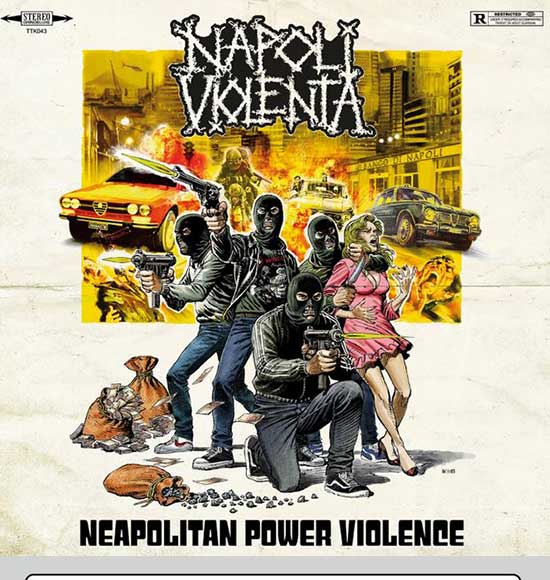 Southern Italian grinders NAPOLI VIOLENTA are today premiering the single “Diamonds and Crust”. The song is featured on the band’s new album “Neapolitan Power Violence”, due out October 31st 2021 via Time To Kill Records.

“Neapolitan Power Violence” by NAPOLI VIOLENTA is a tribute to 60s and 70s Italian crime movie genre known as “Poliziottesco”. Along with giallo and spaghetti western, poliziotteschi films were a prolific genre of popular and commercial filmmaking, not so appreciated by critics although they inspired thousands of directors and screenwriters. The record is a journey through raw and brutal hardcore\grind riffing, crime story based lyrics, (not so) popular quotes from Poliziottesco inspired cinema and ineffable “for fun” attitude.

NAPOLI VIOLENTA intentionally wanted this record to be recorded in a raw and analog fashion with old style production to fully capture the live sound of the band. And it sounds like a car-bomb.

NAPOLI VIOLENTA was born in the Neapolitan hinterland in 2018. Four old exponents of the Neapolitan metal/HC punk scene whose identity remains unknown and shrouded in silence started collaborating to conjure up the most dangerous kind of extreme music. The intent was immediately to merge Poliziottesco – a subgenre of crime and action films that emerged in Italy in the late 1960s – and grindcore, two worlds, two revolutions that at first sight couldn’t be any more distant, but both renowned for being cynical, infamous and violent.
The project therefore takes its name from the film of the same name directed by Umberto Lenzi in 1976, “Napoli Violenta”, the second chapter of the “Trilogia Commissario Betti”, starring Maurizio Merli and with a soundtrack by Franco Micalizzi. Musically, inspiration is clearly drawn by early Napalm Death, Terrorizer, Repulsion, Carcass, Extreme Noise Terror, Brutal Truth… the logo itself is a clear example of “pezzotto” (fugazi art), which represents a tribute to the genre.
All hail Mario Merola and Pino Mauro, what t’nnis a dìcer ‘rà Sceneggiata?? Fun attitude, sarcasm, sings in Napulenglish, capeesh?