PARAFlixx paranormal+ Is THE Place To Get Spooked This Halloween 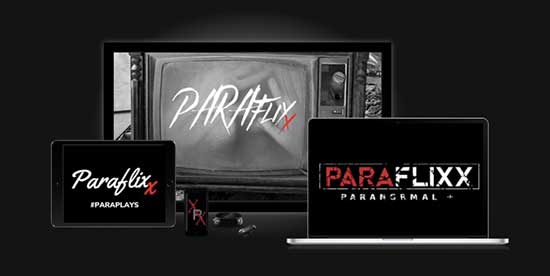 October is the month for spooky obsessions, ranging from ghosts and the spirit world, through the possibility of UFOs and alien life forms, vampires and beyond. Now there’s a bold new streaming service that offers a one-stop treasure trove of terror.

PARAFlixx paranormal+ – regarded by its fans as “the Netflix of the paranormal” – has arrived as the official home of the paranormal. Bringing together an ever-growing library of fictional programming, original reality shows, music videos, and feature films spanning the paranormal, supernatural, universe & beyond, & horror, as PARAFlixx makes a big splash in the world.

“PARAFlixx is a subscription on-demand website, as well as an app on Roku TV, Chromecast, Google Play, Apple Store, Amazon Fire and Apple TV,” said PARAFlixx President & CEO Natalie Jones. “We came together to fuse the Paranormal universe with Hollywood know-how. We have big plans for the future and will have millions of subscribers within five years.”

“This is the perfect time to launch as we experience disclosure and awakening on a global scale,” says Jones. “We extend to all things supernatural, horror, thriller, vampire, UFO, extraterrestrial, cryptid and spiritual content, plus an Enlightened+ learning collection. We also created the #PARAPlays collection, which are paranormal clips captured on film.”

The home of the paranormal matches the programming format of industry giant Netflix by predicting other programming individual viewers will enjoy. The more they watch, the better the system works in helping them find other programs that best match their interests.

PARAFlixx paranormal+ is unique because nearly 90 percent of the content is exclusive, not found on any other streaming service, with new programming

options added weekly. Subscribers can join by either paying $29.99 annually or $3.99 per month, which includes a three-day free trial to explore at leisure. Subscribe at www.paraflixx.com and download the APP for seamless streaming on-the-go, on television, or from your favorite devices.

Jones is also excited to announce the production of a new PARAFlixx Original feature film: a vampire movie with a unique Catholic angle Transubstantiation. Set to debut in 2022, the film by writer-director Cody Knotts folllows a vampire (newcomer Ryan Joseph) who discovers that his only chance for a cure is to drink the blood of Christ. He abducts a priest namedFather Mark (Scott Cooper of “The Maze Runner” and “Homeland”) and a family to force God to perform a miracle.

“It’s groundbreaking and it touches on something that does not currently exist in the film industry right now,” says Jones. “It’s definitely going to be an explosive feature film.”

The movie will join other PARAFlixx programming that include:

1. Beyond the Dimensions, a PARAFlixx Original series which follows paranormal investigators Mike Hatcher, Ashley Moreno and Jason Baker as they bring a new edge to Spirit communication.

2. The Harrisville Haunting: The Real Conjuring House, an original documentary which takes place at The Harrisville Farmhouse, the location for the first film in the wildly successful “The Conjuring” trilogy of true-life demonic possession tales.

3. Alone At Hinsdale Nick McKnight spends a night alone exploring a lonely house, The Haunted Hinsdale House, in the middle of the woods.

Add it all up, and it’s clear that PARAFlixx paranormal+ is going to be a force to be reckoned with on the programming landscape. And with the spookiest season of the year in full force, now is the perfect time to sign up for the service and #DareToStreamAlone.

“Every October we showcase the network theme ‘#HALLOFlixx,’ somewhat like the Travel Channel themes itself ‘Ghostober,’” says CEO Natalie Jones. “Special episodes will come out that month in celebration of ‘31 day of Halloween’ and we will incorporate other aspects to bring an extra level of celebration to the platform.”