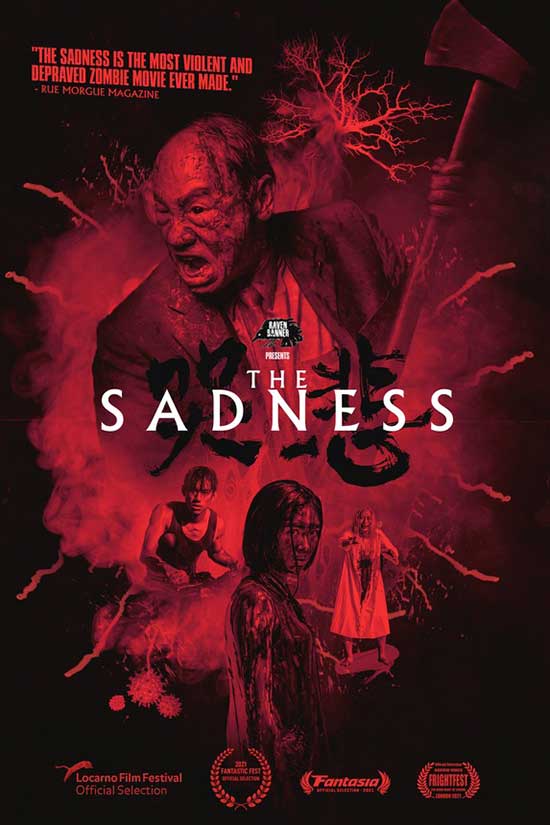 After a year of combating a pandemic with relatively benign symptoms, a frustrated nation finally lets its guard down. This is when the virus spontaneously mutates, giving rise to a mind-altering plague. The streets erupt into violence and depravity, as those infected are driven to enact the most cruel and ghastly things they can think of. Murder, torture, rape and mutilation are only the beginning. A young couple is pushed to the limits of sanity as they try to reunite amid the chaos. The age of civility and order is no more. There is only “The Sadness”.

First-time feature film writer/director, Rob Jabbaz, brought his biggest project to date, “The Sadness”, to Fantasia Festival for its North American premiere. Not only did it not disappoint, it won Fantasia’s “New Flesh Award” for Best First Feature. Strap yourself in, because you’re in for quite a ride. 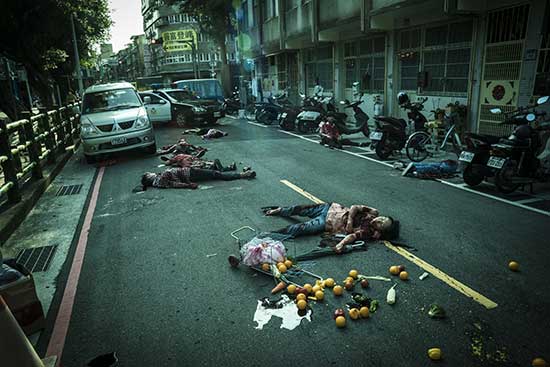 An epidemiological pandemic has been spreading through Taiwan for the better part of the year, and although the flu-like symptoms related to it haven’t been taken too seriously by the government, scientists, one in particular, warn that its recent mutation could result in an absolute human catastrophe. Still, the government brushes it off, journalists keep questioning medicine and science, and most citizens see it as a political hoax (seem familiar?). The problem is: the scientist was right. This contagious virus is rapidly transforming regular people into homicidal, sex-offending-beyond-belief maniacs, tearing limb from blood limb, ripping faces off, and much, much worse. Two young lovers find each other at opposite ends of the town as this violent disaster is unleashed and must tiptoe their way through the murders, tortures, and rapes to find each other. 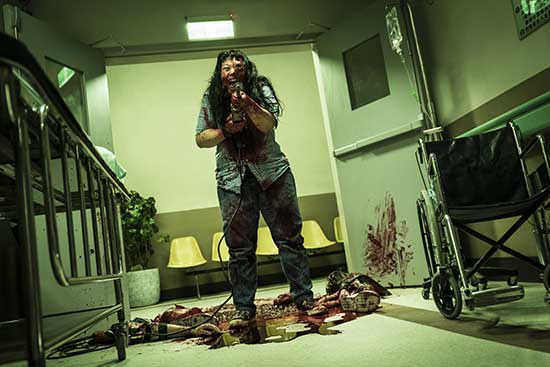 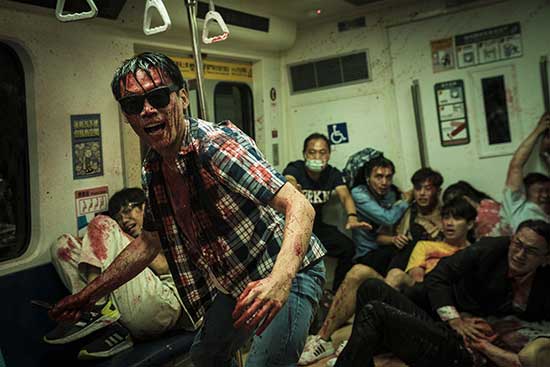 Some films have extremely complex storylines that are not exploited to their full potential and leave so much possibilities on the table, becoming more of a shrug or disappointment from the viewers. Then there are films with the simplest of concepts but exploited perfectly, like 2016’s “Train to Busan”. “The Sadness” is now the newest film to find its place into this category. Its original premise probably wasn’t too difficult to develop or find inspiration for, for the writing of the script, as it evidently resembles almost detail-for-detail to the real-life Covid-19 pandemic.

With it comes its doubters, those who believe the conspiracy theories that governments are somehow inventing this hoax for money, or find it peculiar that this all occurs on an election year, while laughing at the medicine department and brushing off scientists’ opinion as if it came from a delusional child. But if we can’t trust scientists and medicine in regards to health, who can we trust? You wouldn’t go to your local butcher for his opinion on a mechanical problem on your car, so why would you trust a random nobody’s view on medicine when scientists have been studying this their whole life? Regardless what your stance is on this situation, “The Sadness” perfectly ties real life with its story in a very relatable manner. Where the scenario differs and where it allows writer/director Jabbaz a whole buffet of creativity to explore is what this mutated virus forces individuals to become. 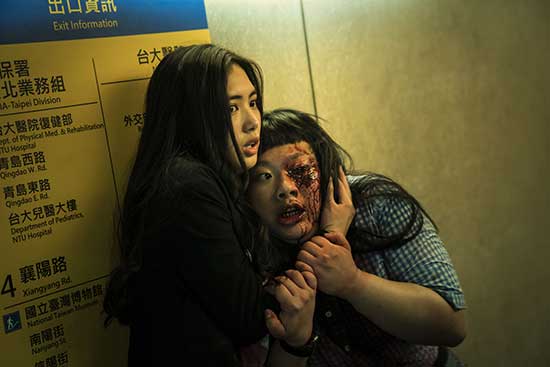 The interesting part of the virus in this film is that it doesn’t completely eradicate every part of the brain that makes us a human; those infected still have the ability to speak and think. They simply have nothing stopping them from acting upon their darkest, primal urges and impulses; murdering, torturing, and committing the obscenest of acts. Every and any person, gender or age is at risk, and any wound can be an orifice, as twisted as that may seem. 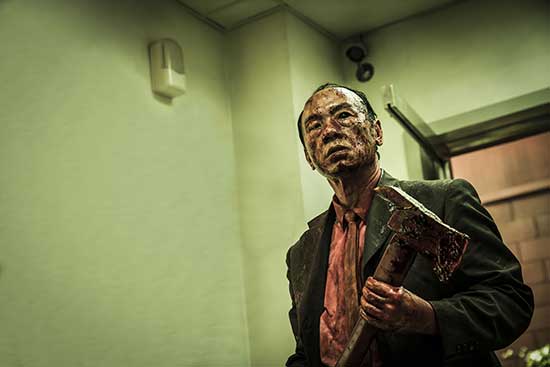 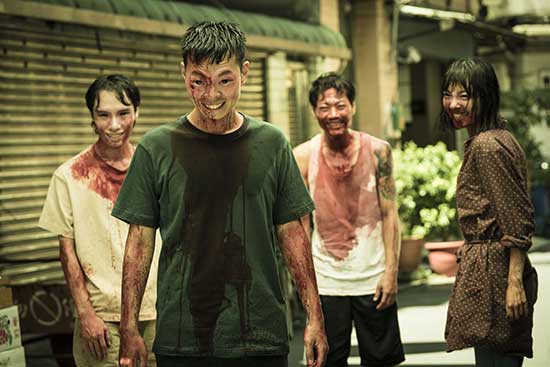 Jabbaz creates a beautiful contrast between the slow-motion, ominous scenes of police officers arresting what seemed like a violent criminal at the beginning of the movie, intertwined with a soft, mesmerizing soundtrack, with the heart-racing, vicious and in-your-face first scene of extreme violence that will knock you off of your seat. Viewers will also definitely get attached to the humble, soft-spoken main characters who share a relatable, modest, yet loving, relationship. While they seem like quiet introverts, they hide a capability to stand up for themselves as well as combat for what they believe is right. 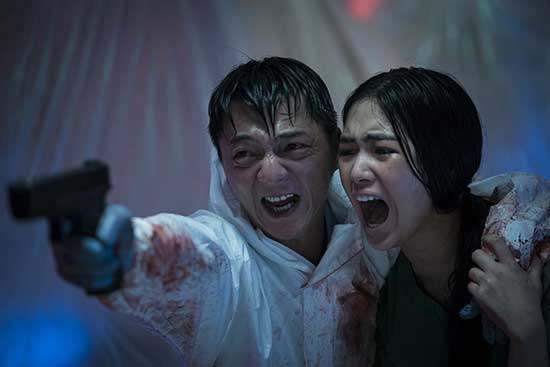 “The Sadness” will take you to obscene, extreme places you hadn’t imagined of, soaking you in a chunky bloodbath of limbs and flesh. If you’ve ever thought what would happen if a really extreme version of “The Crazies” was crossed with a similar concept to “Train to Busan”, you’d get this film. Rob Jabbaz brings to the world a Hell of a ride with, at times, a predictable journey, but oh; what a journey it is, receiving a phenomenal score of 9/10 and making it the top film viewed at this year’s Fantasia Festival.