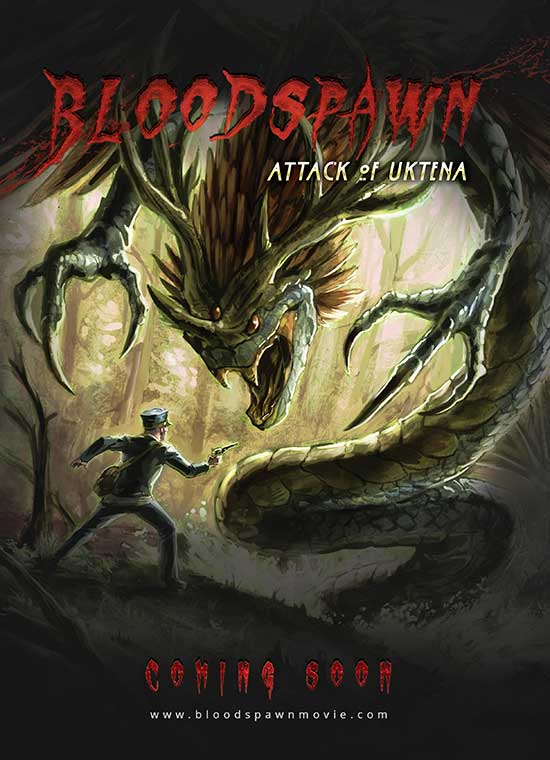 Raw Leiba (Bone Tomahawk,Conan the Barbarian, Falling Skies) and Bill Oberst Jr (Scream Queens,Circus of the Dead,3 From Hell) star in this feature film that takes place in the untamed Aplpalachian wilderness of the 1830’s, a small group of misfits find themselves trapped and surrounded by evil ravenous creatures of Native American legend.

In the time of the infamous Cherokee “Trail of Tears,” a small platoon of US Army soldiers and their prisoner, a renegade Cherokee warrior, find themselves attacked by a giant bloodthirsty flying snake beast in the middle of the Appalachian mountain wilderness. Only three survivors manage to find refuge in a small General Store outpost, owned and operated by an army widow and her young daughter. Soon, two more travelers, a rich plantation owner and his slave, who have also just narrowly escaped the deadly attacking beast, join them in hiding. The prisoner, Standing Bear, and his guard, the Cherokee army scout Hawk, soon come to the realization that the mysterious creature is in fact the ancient Cherokee legend of “Uktena” come to life – a great winged serpent with mystical powers that has the ability to wipe out all of mankind if a fragile agreement between the beasts and the Cherokee people is ever broken.

Unfortunately, now that the Cherokee are being forcibly removed from their land, the treaty cannot be continued and the wrath of the Uktena has been unleashed. Under the guidance and instruction of Hawk, the small yet diverse group must come together, setting aside all of their differences, mistrust, and prejudices, in order to survive. Finding that not even the cabin can protect them from the multiple snake beasts, the group makes a run for an old barn that harbors an amazing arsenal of futuristic weapons, built by the widow Clare’s late husband. But even with great firepower, the odds are still stacked high against them. When Clare’s daughter, Sally, is snatched and swept away by one of the beasts, the remaining survivors embark on a mission to not only rescue the little girl, but to fight back against the terrorizing creatures, bring an end to the ancient curse, and save all of mankind from the threat of a deadly Uktena population explosion!

LEIBA plays Yonagadoga (“Standing Bear”) a man that knows a thing or two about being an outcast and loner, not fully accepted by his society. His father was Cherokee and his mother was an enslaved African American, so he never quite fit in with his fellow Cherokee. However, when the horrors of the “Trail of Tears” comes to his people’s doorstep, Yonagadoga steps into the role of hero without a second thought, fighting back against the US Army and their forced removal of the Cherokee with ruthless vengeance and violence through targeted guerrilla strikes upon the soldiers.

It is Yonagadoga who first recognizes that the legend and curse of the Uktena has come to fruition. He must once again summon his strength and rise to the occassion as a Cherokee warrior to do all he can to save all of humankind.
Horror icon Oberst Jr plays Augustus a pompous,egocentric plantation slave owner who’s actions and opinions threaten to doom all human existence as the Uktena close in.