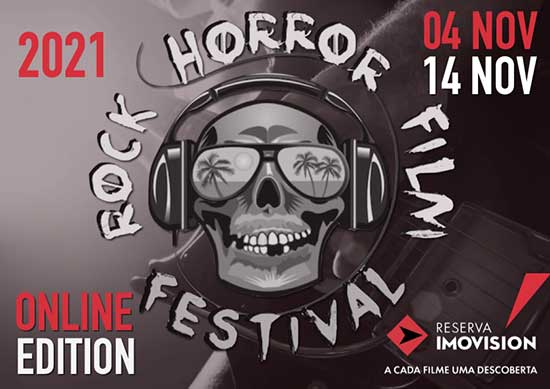 Sin Fronteras Filmes partnered up with the streaming platform Reserva Imovision for the IV Rock Horror Film Festival 2021 that will take place from November 4th til the 14th. The festival that  annually shows Brazilian and foreign films of fantastic genres such as: horror, suspense, fantasy and sci-fi, also offers workshops and round tables with high profile professionals from the audiovisual scene that will now be reunited in the Rock Horror Labs. The rock shows with live bands that happens since the first edition, now take place in lives every night of the festival, along with interviews with directors, actors and musicians of the participating bands at the festival channel.

Chrys Rochat, the festival director, is very excited with the new edition and reveals: “The Rock Horror 2021 will have films from more than 20 countries, besides the newcomers: Zambia, Ecuador and Portugal. We are excited to have the festival at Reserva Imovision that is a beautiful platform and unites incredible films from all the major festivals in the world. It’s a pleasure and an honor to have the festival happening there too from now on, and a natural evolution, since the first edition debuted at Reserva Cultural Niterói and São Paulo and, since then, it takes place in the cinemas from the group. On top of the hair-raising films, we will also have the participation of the international filmmakers and artists in our lives and the Rock Horror Labs.”