Home | Articles | Feature Article | The Most Overplayed Game! A Century of Hunting Humans on Film – Part 2

The Most Overplayed Game! A Century of Hunting Humans on Film – Part 2 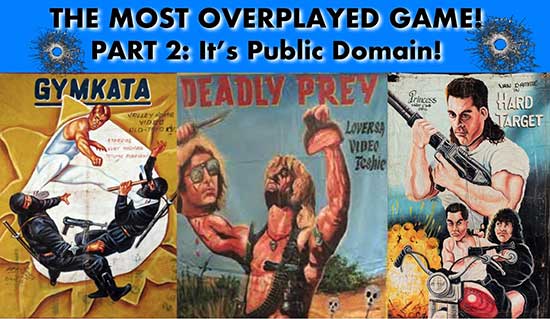 It’s time to load the crossbows and unleash the hounds for Part 2 of The Most Overplayed Game. We’re running down the endless parade of Most Dangerous Game knockoffs. After that we’ll jump in the Hum Vee for a real-life human safari.

Hard Target (1993) Director John Woo’s English language debut suffered from star Jean-Claude Van Damme’s creative interference, including his own, cocaine and ego fueled, re-edit. It’s still an entertaining action picture, but you can’t help but wonder how cool it could have been if Van Damme had just stayed in front of the camera. Van Damme sports the first in the hunting humans, mullet trifecta. 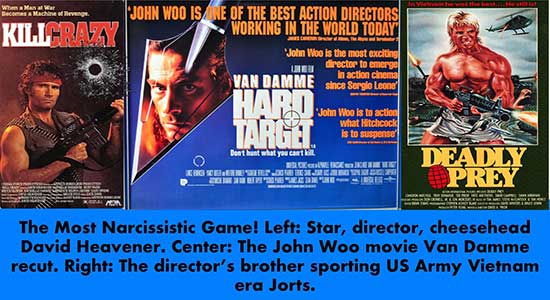 Kill Crazy (1990) — Mullet topped David Heavener was the writer, producer, composer, star, director and executive narcissist on this, and many other duds. Despite starring in twenty plus movies Heavener still emotes like a pile of lumber and fights like a hippo on oxycodone. There’s an unspoken, but decidedly mercenary undertone to Heavener’s films, that goes beyond their vanity element. Part of that creepiness stems from his allegedly pushing every actress’s “Some Nudity Required,” contractual clause to its limit—I’ve heard some sordid accounts from crew members. Of course Heavener’s gone on to direct crowd funded evangelical films, so get out those credit cards and get right with the lord!

Deadly Prey (1987) — A painfully cheap retread from David Winter’s Action International Pictures—the company that proved you could make fifty movies without ever getting one right. Director David Prior cast his mullet topped brother, Ted Prior in the lead. Prior runs a dead heat with David Heavener for the ‘Most Dated Haircut’ award. If you must watch this film please do so with the RIfftrax commentary to protect your sanity. 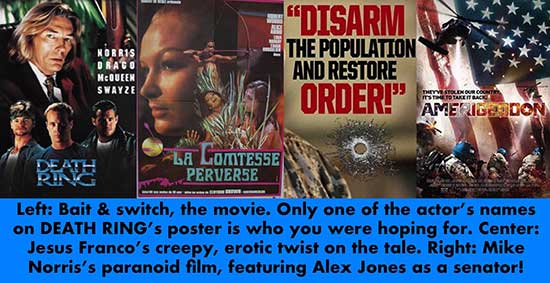 Death Ring (1992) – Mike Norris, Chad McQueen, Don Swayze… wow, there’s a lot of celebrity DNA swimming around this flaccid ‘Green Beret gets kidnapped for a hunt’ tale. I’m surprised Frank Stallone and Joe Estevez didn’t get in on the action. It’s better than Deadly Prey and Kill Crazy, but that ain’t saying a lot. Some decent fights liven it up, but there’s never an attempt to inject anything new. This illustrates one of the problems with borrowing The Most Dangerous Game’s core concept—its elevator pitch simplicity challenges filmmakers to either up the ante, or get hopelessly bogged down. Death Ring isn’t all bad. Screen villain Billy Drago (The Untouchables, 1987) lights up any scene he appears in. Star Mike Norris went on to direct semi-Christian right-wing films like The Crossroads of Hunter Wilde and AmeriGeddon. Perhaps Norris and Heavener should team up to bilk the MAGA masses?

Countess Perverse (1974) – Jesus Franco proves that softcore porn, human hunting and cannibalism make for an uneasy menage à trois. The plus factors? There’s lots of great cinematography. Down side? It’s followed by long stretches where the camera wanders around the mansion like a stoned teenager at the mall. We also glimpse parts of middle-aged Howard Vernon’s naked body that just can’t be unseen. There’s some pretty reprehensible 1970’s misogyny jammed in here, particularly a scene where the villainous couple rape the heroine, “until she enjoys it.” If that concept doesn’t seem horribly wrongheaded to you, well, come over to my house and I’ll hit you with a baseball bat, “until you enjoy it.” Doesn’t really work, does it?

Gymkata – If you only see one of the films on this list make sure it’s Gymkata. Real life Olympic gymnast Kurt Thomas makes his big screen debut as Jonathan Cabot, an Olympic gymnast recruited by the SIA (not the CIA?) to infiltrate the mountain country of Parmistan—the same country where his spy father disappeared. Once there he must participate in a game, imaginatively named, “The Game,” in which foreigners run an obstacle laden marathon while local warriors try to kill them. The SIA devises a new form of combat for Cabot, combining martial arts and gymnastics. It should have been called Gym-Fu, but instead it’s Gymkata. Everything about Gymkata is delightfully wrong, from its script to its action scenes, right down to Parmistan’s Renaissance Fair reject population. On the plus side, Filipino actress Tetchie Agbayani is gorgeous as Princess Rubali. The filmmakers keep repeating that her character’s mother was Indonesian to justify her ethnicity… they say it like fifteen times! Gymkata is allegedly based on a novel entitled The Terrible Game, but it’s still dependent enough on The Most Dangerous Game to qualify for this list. Fun fact: actress Tetchie Agbayani went on to earn a Master’s Degree in psychology—probably in an attempt to figure out what the filmmakers were thinking.

RIP, Kurt Thomas (1956-2020), a great athlete and trainer who should have been an Olympic champion and certainly deserved a better movie than Gymkata.

Over time Connell’s great short story devolved into a trope, which is Hollywood-speak for, “We’re not paying for the rights.” Television wasn’t above cribbing Connell’s story—usually when the writers were running out of creative gas. Some were dramatic retellings such as the Star Trek TOS episode, “The Squire of Gothos,” while others were comedic variations like Gilligan’s Island’s,” The Hunter” and an episode of Get Smart. Add Lost in Space and The Simpsons, heck, Even Xena: Warrior Princess wound up being hunted by an insane prince.

This culminated in the 2020 web series Most Dangerous Game, starring Liam Hemsworth as the human prey, and Christoph Waltz as the wealthy euro villain. This energetic series was launched on the short-lived streaming service Quibi. Before its demise, Quibi managed to lose a staggering 1.74 billion dollars—proof that investing in entertainment is truly…The Most Dangerous Game!

AND NOW THE GRAND FINALE:

In 2003 the website huntingforbambi.com made this unusual pitch to any bored sportsmen with $10,000 lying around: 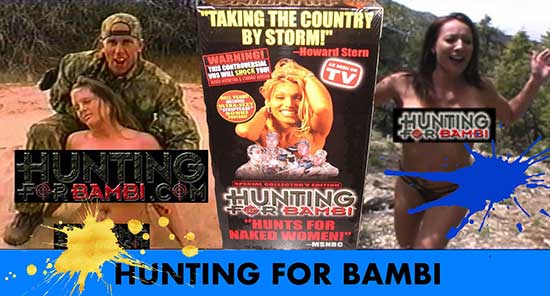 “If you would like to fly out to wonderful fun filled Las Vegas, Nevada for the hunt of a lifetime now is your chance. You can actually hunt one of our Bambi babes and shoot her with paintballs while we film the whole thing and tape it for your own home video. We will send you a complete list of wall hangers to choose from once your reservation is confirmed for your hunt. With over 30 women ready to be chased down and shot like dogs we guarantee a wide variety of Bambi’s to choose from. Whether it is the girl next door or a perfect 10 we have an abundance of these beauties. So, if you are the ultimate sportsman and are seeking the ultimate adrenaline rush then come out to our ranch and shoot one of these trophies. Then take home the video of her mounted on the wall for all your friends to see. This is the gift for the person who thought he had it all.”

Well, that’s not creepy at all, is it? Did I mention that the women being hunted and, ‘shot like dogs,’ are naked? Yup. The website also sold a $20 DVD (or VHS) of a previous hunt. That video would become an important part of the Hunting for Bambi hustle. Unfortunately, that hustle worked too well.

Media outlets picked up on Hunting for Bambi, sending reporters out to investigate. The promoters invited the likes of KLAS TV, Fox News, KBVC Las Vegas, The Las Vegas Review Journal, ABC News, and, of course, The National Enquirer on what they proudly proclaimed was their eighteenth hunt. The hunter had paid $4000 to conduct a three-girl safari. The naked woman who got shot was paid $2500, while the other two received $1000 each. The media folks all condemned the hunt, while airing as much footage of it as possible. What they didn’t bother to do was verify their sources. Surprisingly, none of them questioned how a company could charge $4000 for a hunt while paying out $4500 to the hunted.

Paintball manufacturer, Brass Eagle, was so upset that they issued a formal statement touting the dangers of shooting paint balls at naked people.

All the media bruhaha surrounding Hunting for Bambi enraged the Mayor of Las Vegas, Oscar Goodman, who felt it demeaned their city’s reputation… read into that what you will. He initially pursued criminal charges, until the DA’s office, who DID check their sources, quietly dropped all the charges. You see, the whole point of this sleazy, but borderline brilliant scheme wasn’t to sell naked lady safaris—those never existed. It was all a charade designed to sell the video, using the media outrage to garner free publicity. The “Bambi” that had been “shot” for reporters had simply smeared paint on herself when nobody was looking. The scheme’s mastermind, Michael Burdick, had advertised the astronomical $10,000 per safari price tag to dissuade anyone from actually buying one. That purchase would have been problematic, as the Hunting for Bambi website couldn’t process transactions over $200. Mayor Goodman had to settle for fining the hoaxers a few hundred bucks over a business license irregularity.

Hunting for Bambi’s founder, Michael Burdick, was never prosecuted and managed to sell a fair number of videos before abandoning the project. The Bambi website hasn’t been updated since 2004, but, until recently it was still offering videos for sale. The only difference is that they were advertised as “The most hilarious video ever made.”

If I ever met Mr. Burdick, I would look him in the eye and say, “Sir, you are nothing more than a sleazy hustler who degrades women. Oh, and do you accept PayPal?”

A lot of time has passed since Hunting for Bambi, conned the likes of Fox News into providing free advertising. I’m sure Fox has learned their lesson, and will never again become a media mouthpiece for some charlatan peddling misinformation and lies to the public at large.

And that’s how an eight-thousand-word story somehow became eight thousand separate films and television episodes that rarely paid the original author’s estate. Let us know what your favorite version is, or just angrily remind me about all the ones I left out, like Surviving the Game. Yeah, I left that one out on purpose.

Hey, you know what doesn’t steal its ideas from another author’s classic short story or shoot paintballs at naked, objectified women? It’s my latest horror novel Primeval Waters, just published by Severed Press. You can find it in paperback or Kindle on Amazon.

Big thanks to Snopes.com and Joe Oesterle for preserving the Hunting for Bambi saga.

Read: The Most Overplayed Game! A Century of Hunting Humans on Film – Part 1