Home | Articles | Feature Article | The Most Overplayed Game! A Century of Hunting Humans on Film

The Most Overplayed Game! A Century of Hunting Humans on Film

This is the saga of a brilliant short story, that became a great film, before being diluted into dozens of lesser films, only to be reincarnated as one of the first, great internet hoaxes. Today we’re throwing a bone to The Hounds of Zaroff—better known as The Most Dangerous Game.

Every now and then a writer stumbles onto a concept so clear and vivid that it practically writes itself. Way back in 1924, author and journalist Richard Connell achieved just that when his short story The Most Dangerous Game appeared in Colliers magazine. It won the O’Henry short fiction award and was quickly snapped up by other publications before appearing in dozens of published short story collections.

It’s the tale of big game hunter Sanger Rainsford, who tumbles off the deck of a yacht, only to wash ashore on Ship-Trap Island. The island is ruled by a Russian Cossack named Count Zaroff, assisted by his giant mute bodyguard. But Sanger’s rescue is anything but, as he quickly discovers Zaroff is a madman. The count is a former big game hunter who, weary of stalking dumb animals, forces ship wrecked sailors to become the titular “most dangerous game.” To earn their freedom captives must elude Zaroff, and his vicious hounds for three days—so far the score’s Zaroff 10, sailors 0. Sanger is drafted for the next hunt, pitting his jungle expertise against the sadistic Zaroff.

The storyline sounds familiar today, and, at a mere 8000 words it’s a masterpiece of brevity. But in that truncated word count Connell introduced a bevy of action/adventure/horror tropes. We get a macho hero pitted against a purely evil, yet ever so lordly villain, ala Bond every Bond villain. Of course, said villain is foreign, meaning the character can be adjusted to suit the xenophobia-de-jour. Add to that a giant mute manservant, ala Odd Job, taxidermized human beings, man eating hounds… the list goes on. That’s why The Most Dangerous Game sits on many top fifty short story lists. It’s also the ultimate “elevator pitch” story, and Hollywood was eager to jump on it. For once, they got it right first time out. 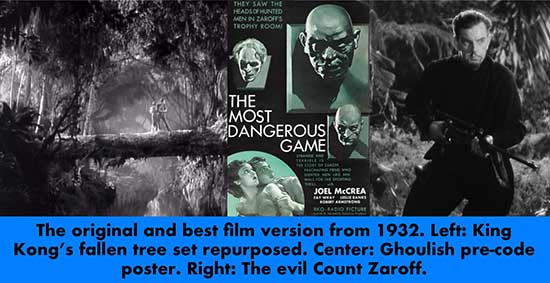 1933’s The Most Dangerous Game is one of the most underrated action-adventure films ever produced. Joel McCrea and Faye Wray team up on the same jungle sets that were being built for King Kong. In fact, Fay Wray was force marched daily from shooting this film, to doing screen tests for King Kong, leaving her physically exhausted. Both films are the work of Merion C. Cooper and Ernest B. Schoedsack, a pair of World War One flying aces and Hollywood outsiders, who’s King Kong saved RKO Pictures from bankruptcy. If King Kong was the Star Wars of its day, then The Most Dangerous Game was the Die Hard. Like Kong it’s filled with atmosphere and the kind of outlandish violence you can only see in pre-code pictures. If you’re not familiar with Pre-Code films than check out King Kong, 42nd Street, Tarzan and His Mate or Sign of the Cross, to see how much your ancestors loved innuendo, violence and scantily clad women.

Joel McCrea is a great, rugged leading man, and Faye Wray is stunning. Fun fact— Back in 1933 Great Danes were rarely seen in the USA, so the mere sight of Zaroff’s pack of monstrous hounds scared the bejesus out of American audiences. This same canine cunning was repeated when 1976’s The Omen cast Rottweilers as hell hounds. The breed was virtually unknown to North Americans, and (I can personally assure you) scared the crap out of audiences.

1945’s A Game of Death was a remake of the 1933 film, even reusing jungle chase footage from the original. The great Robert Wise (Day the Earth Stood Still, 1951) directed, following up the successful The Body Snatcher (also 1945). While Wise makes his protagonists much smarter than the original’s, he just can’t light the whole string of firecrackers that made The Most Dangerous Game so much fun.

After this film indie producers started borrowing the concept, without crediting or, I’m assuming, paying the author. Here’s a truncated list of the best and worst. I’ll be skipping films like The Running Man, The Tenth Victim or The Hunger Games as they fall under the murderous media/killer game show subgenre.

Bloodlust (1961) – This is a slow moving, but occasionally creepy take on the story. It’s surprisingly gruesome for its time and breaks the mold by providing a heroine who happens to be a judo champion. In a nice change of pace, she tosses one of the bad guys into a vat of acid. Evil madmen should really stop keeping uncovered vats of acid around their underground lairs.

Now we’re talking! Brian Trenchard Smith’s 1982 film tosses subtlety and good taste to the wind, while ladling on the gore. Despite a low budget, Smith and his crew lend Turkey Shoot some gorgeous photography and genuine scope, particularly during the fight scene in a burning field—we’re talking acres of fire here! Steve Railsback is good, though he clearly wants to be someplace else. Olivia Hussey, who’s career faltered after her breakthrough role in Romeo and Juliet (1968), gives a genuinely bizarre performance. She seems incapable of handling simple objects, running or fighting… in fact anything physical seems like a completely new experience. Her drunken monkey handling of a truck mounted machine gun even had me ducking for cover. But that great Aussie man-mountain Roger Ward (Fifi in Mad Max) steals the show as a sadistic prison guard. He is, as always, fantastic. Have you seen him as a singing buccaneer in 1982’s The Pirate Movie? Wow! 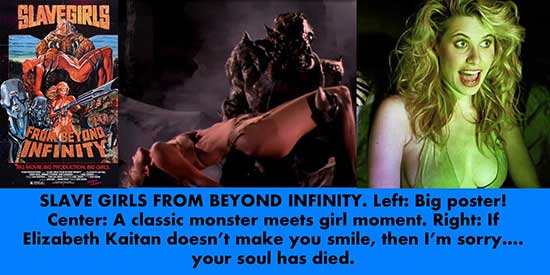 1987’s Slave Girls from Beyond Infinity is my second favorite adaptation of Connell’s story. Sure, it’s a shameless, low budget, T&A, science fiction film—but that’ its charm. I couldn’t help smiling at the lovingly crafted, but not-quite-good-enough miniatures, and the obviously studio-built foggy jungle. Elizabeth Kaitan isn’t a brilliant actress, but she’s likeable as hell, displaying the same wide-eyed sincerity that made Assault of the Killer Bimbos (1988) watchable. Here she plays Daria, a quick-witted, space ship piloting, slave girl who’s desperately in need of a cool backstory. Is she a former space pilot? A rebel commando forced into slavery? I want to know! Eighties scream queen Brinke Stevens is also on hand for some requisite nudity and a disappointing death scene. We also get a pair of Laurel and Hardy-esque robots who should be annoying but somehow work. I think everybody involved, including Kaitan worked their butts off to make something that would stand out from Charles Band’s, Empire Pictures pack.

Predator (1987)—That evil foreigner Zaroff is now a literal alien who’s come to Earth for Arnold season. This pulse pounding action film is the filet mignon of beer and pizza movies. Savour it, because it’s all downhill from here.

And while you’re waiting, why not hunt down a copy of my new horror novel PRIMEVAL WATERS, published by Severed Press, available in paperback or Kindle. It’s on Amazon, along with every other consumer product on earth.

Check out Part 2 – The Most Overplayed Game! A Century of Hunting Humans on Film