31 arrives on Blu-ray + Digital Steelbook from Lionsgate, exclusively at Target 10/26 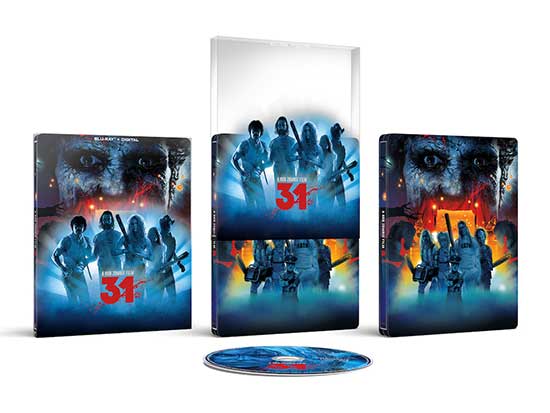 From beloved cult director Rob Zombie comes the new re-release of his spine-tingling carnival of horrors, 31, arriving October 26 on Blu-ray + Digital Steelbook from Lionsgate, exclusively at Target. Written, directed, and produced by Zombie, 31 is a fiendish Halloween horror-gore romp set in 1976, in which five happy-go-lucky carnies on a cross-country road trip are kidnapped and hunted by murderous clowns in an escape room-style hideaway in the middle of nowhere. With an ensemble cast that includes Sheri Moon Zombie, Jeff Daniel Phillips, Lawrence Hilton-Jacobs, Richard Brake, Jane Carr, and Malcolm McDowell, 31 is tailor-made for diehard horror fans and Rob Zombie acolytes. Featuring brand-new reconceived artwork from award-winning graphic artist Vance Kelly, 31 will be available on Blu-ray + Digital Steelbook at Target for the suggested retail price of $21.99.

OFFICIAL SYNOPSIS
On Halloween, five carnival employees are kidnapped and held hostage in an isolated compound known as “Murderworld.” They are thrown into a sadistic game called “31” where they must survive 12 hours against a gang of maniacs dressed like clowns. However, the clowns aren’t the only ones they need to worry about — a grand scheme of satanic rituals and a much more sadistic plot awakens.