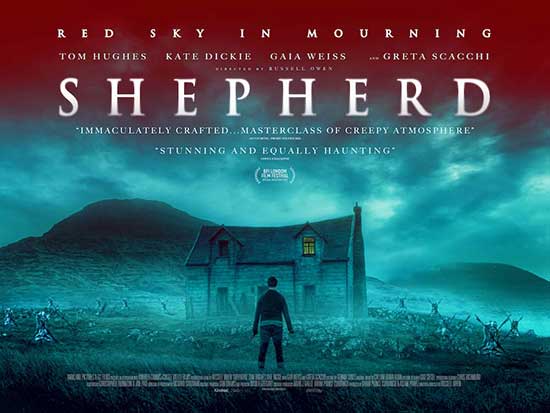 7th September 2021, London, UK: Darkland Distribution is thrilled to announce that the upcoming British elevated horror, Shepherd, has been made an Official Selection at the upcoming BFI London Film Festival 2021.

The film starring starring Tom Hughes (Red Joan, Victoria), Kate Dickie (Game of Thrones, The Witch), Gaia Weiss (Vikings, Medici) & Greta Scacchi (The Player) will have its World Premiere at the festival on 14th October, with a general theatrical release on 5th November.

Writer and Director of Shepherd, Russell Owen, was delighted with the news of the film’s selection; “I’ve followed the BFI London Film Festival for decades, so to actually be a part of it is surreal and a massive honour. I can’t think of a better platform to bring Shepherd to an audience and I’m over the moon.”

Tom Stewart, Acquisitions Director at Darkland Distribution added; “We’re delighted for Russ & his team who have clearly shown such skilled work to now receive this recognition in what is a very competitive field of British productions.”

To celebrate the film’s Official Selection at BFI London Film Festival, Darkland have released a new sinister trailer to give audiences a taste of what’s to come.

Running from grief after the mysterious death of his wife, Eric Black takes a job as a shepherd. Trapped alone on a majestic weather-beaten island with an ominous secret. One mans spiralling madness meets a vengeful supernatural force. What starts as the perfect wind-swept escape becomes a race to save his sanity and his life.