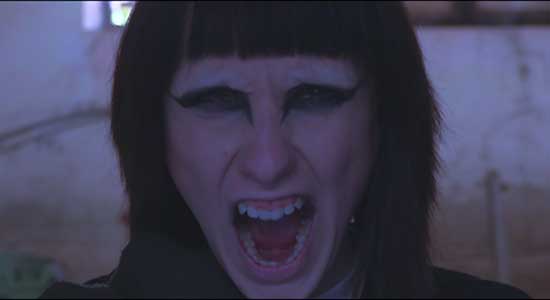 Their Voice, the spiritual sequel to Innermind (presented at the Spazio FEdS at the last edition of the Venice Film Festival), was made with the support of Animal Equality USA and Animal Equality Italy. The film uses strong metaphorical language to describe the horrors hidden in the meat industry, and then some. The cast includes Lea Borniotto, Vera Borniotto, Valentina Pellitteri, Roberto Dal Ben, Edoardo Barberis and Riccardo Ranno.

This is the second short film written and directed by Alienside Studio, a Z Gen creative team founded in Genoa in 2020 by Edoardo Nervi (director and director of photography) and the twins Lea & Vera Borniotto (directors and performers), who chose the language of underground cinema and the web to disseminate visionary and fantastic content related to issues of social value.

“We had already chosen the location of the old Colonia di Monte Maggio, a Fascist-era building on the hills above Genoa,” say the directors. “And during the first inspections we made a chilling discovery: hidden in the basement were the remains of an old slaughterhouse: rusty hooks, drains and blood splattered on the walls. That became our set”.

Populated by vile and monstrous clowns, the film has surreal and dark tones made even more intense by the electronic soundtrack by Ginevra Nervi. The scream of the protagonist, at the centre of the film, was created by superimposing and processing the real, heartrending screams of animals locked in farms and slaughterhouses.

Their Voice is available on Amazon Prime. Soon to be released (now on Amazon Prime US, UK, DE) and soon to be premiered in cinemas in Rome, Milan and Genoa is the first feature film by Alienside: Custodes (2021, Italy, 90′), a gothic thriller with an abstract and conceptual slant. The streaming film, produced by the group with the collaboration of Mattia Stabile, is distributed by Saturnia Pictures srl.