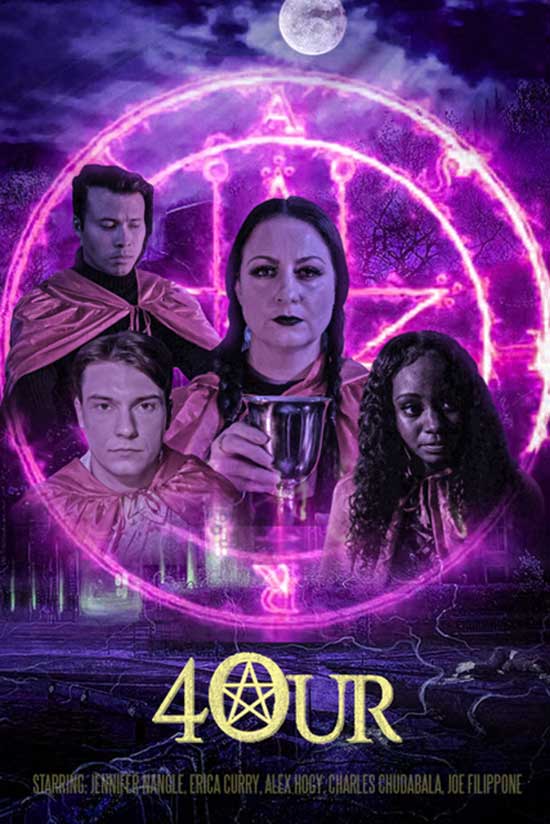 Four witches…only one will be chosen.

More short films, kiddies! Today we have 4OUR, written and directed by Charles Chudabala.

Four members of a witches’ coven are meeting for what appears to be the last time. This last ritual, honoring the Blood Moon, will end their association. One of them will “ascend” and the others…well, not sure really. They seem to think they will just go their seperate ways.

Everyone is coming into this moment with some baggage. Elyse (Erica Denise Curry) is confident she will be chosen to ascend. Dominick (Alex Hogy) thinks she’s wrong and its his destiny, not hers. Christopher (Charles Chudabala) just wants everyone to get over themselves and get on with it. And High Priestess Janelle (Jennifer Nangle) is trying to keep the peace so they can do that.

This was an interesting film. It feels like we came in to the middle of a larger story. We learn about their “wishes” and how they will all come to an end after this night. Some wishes were more personal than others, while at least one didn’t really make any. There is so much in exposition to catch us up before the real fun begins, which leads me to believe this might have been meant to be part of another story.

I’m not generally a fan of “witch” movies but I did note in the credits a line dedicated to the role of “Wicca consultants”, which tells me the filmmaker tried to be fair and accurate to that belief system. So I can appreciate that.

A note on the cast – I recognized Ms Nangle from another project of hers I reviewed MALVOLIA: QUEEN OF SCREAMS. My memory is that i enjoyed that. She is good in this as well. Just the right amount of gravitas and humanity that one would expect from a Priestess trying to keep a squabbling coven together.

Overall, this was a good short. Sound and production quality are really high, and the cast are decent. Its worth a look, in my opinion.