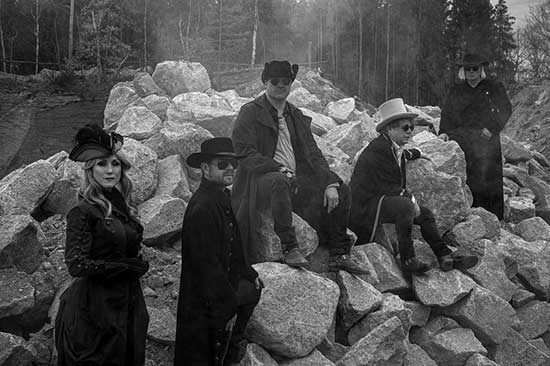 Czech gothic rock heroes CATHEDRAL IN FLAMES are releasing the long-awaited album Hang Me High & Bury Me Deep. Says Gatsby: “It’s about the darkness of our souls that is around us, perversions hidden in people but also about hope and romance. This is exactly what Gothic should look like.”
“The whole recording process was extremely demanding on our mental health this time. While laying down vocals, I even experienced something like a change of consciousness. It was disturbing, but at the same time liberating. They (the songs) are beautiful, monumental and dark. Yet at the same time uplifting, “ adds Phil Lee Fall.

Hang Me High, Bury Me Deep is available worldwide on CDs and all digital platforms. A special vinyl version in a 3D gatefold package will be released a month later. You can find them here: ffm.to/pkdo71.

Nine songs influenced by the likes of Sisters Of Mercy and Fields Of The Nephilim both in terms of sound and musical ideas.

CATHEDRAL IN FLAMES singers Phil Lee Fall and Ambra Von Bernstein have layered dozens of vocal tracks, making the choirs anthemically monumental and the choruses appropriately vaulted. The musical arrangements used a combination of analogue techniques and state-of-the-art technology with multi-layered sound, including samples and guitar parts by Billac DeVille, Mr Theorodick and Gatsby, who – in addition to the obligatory bass guitar – also recorded a substantial part of the guitars and keyboards. The piano virtuoso Antonio Koczwara was also invited to record the demanding keyboard parts.

Every detail of the album was painstakingly cared for.  With the work of mixing wizard Eike Freese (Deep Purple, Helloween, Lord Of The Lost), a crystal clear sound was created for the album.