Blackened Death/Doom Offensive 1914 Returns with New Album,
Where Fear and Weapons Meet, via Napalm Records
Out October 22, 2021 | Pre-Order Starts TODAY!
We are not singing the songs, we are telling the stories!“
(1914) 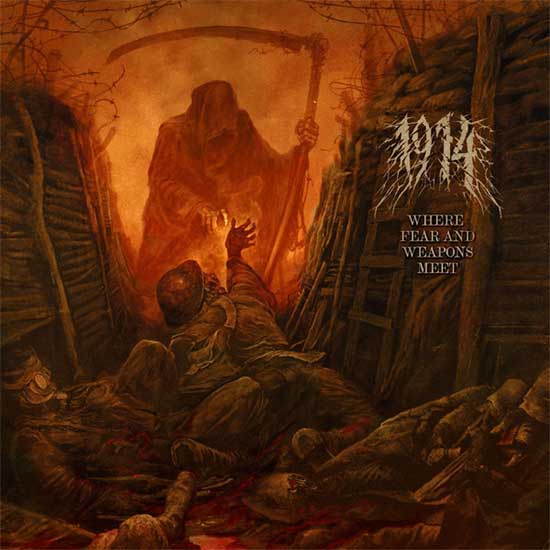 Ukrainian WWI experts 1914 continue to reflect the gruesome tales of World War I, its soldiers’ fate, their death, fear and feats to be never forgotten, and unleash their new opus, Where Fear and Weapons Meet, out October 22, 2021 via Napalm Records.
Its eleven tracks of pure historic harshness follow up to the band’s sophomore full-length, The Blind Leading the Blind (2018), and debut, Eschatology of War (2015), both highly acclaimed amongst critics, and create a sophisticated variety of massively brutal blackened death metal accented by dramatic and realistic audio soundscapes and disquieting melodies spiced with the approach of sludge and doom!
Massive first single “…And a Cross Now Marks His Place” already marks an absolute highlight, as this stamping outburst features none other than Paradise Lost icon Nick Holmes, whose pervasive delivery matches with 1914’s mastermind Hptm. Ditmar Kumarberg’s (9. Westpreußisches Infanterie-Regiment Nr. 176) vocal harshness.
Hptm. Ditmar Kumarberg on the first song:
“The story behind “…And A Cross Now Marks His Place” totally captured me: This is the real letter, handwritten by the British officer to the mother of a soldier who died in action. This was not a standard form sent in thousands, but more like a personal message. He describes the way her son died, tells words of consolation, and emphasizes how the Crown is proud of him, another victim of the massacre between Empires.“
1914 break into their third offering with the intro “War In”, summed up by final “War Out”, and immediately build a common thread to the previous records. “War In” is the original of the most famous Serbian song of the Great War period, “Tamo Daleko”. Like World War I, the album begins in Serbia and continues on the first track from the prospective of Gavrilo Princip, who assassinated Austrian Archduke Franz Ferdinand and his wife on June 28, 1914 in Sarajevo and caused the outbreak of World War I.
What happens next is an intense, in-depth analysis of historical events, for example – Battle of Vimy Ridge, shameful pages of the British Empire history in the track “Coward” featuring Sasha Boole (Me And That Man), The Battle of Messines on “Pillars of Fire” or the infantry regiment, the Harlem Hellfighters, on “Don’t Tread On Me”. Authentic forces like ambient sonic war samplings transport these stories even further into the present and make Where Fear and Weapons Meet another heavily intense and deep-reaching output that will grant 1914 even higher appreciation than the five-piece is already credited with.
1914 on the album:
“Where Fear and Weapons Meet continues the theme we started on The Blind Leading the Blind – with one major difference: these are the stories about hope where most of our characters are staying alive, becoming heroes, and returning back to their homes. Yes, it is still about fear, death, and senselessness of war, but the hope is the only thing the soldier holds on to. And a good portion of luck as well. Even the album cover reflects this – the man lays wounded, bleeding in the trench, reaching his hand to Death begging for relieve, and Death declines to take him. He deserves to live.
The album starts with the assassination in Sarajevo, leads you through the bloodiest moments of the Great War, and ends up with the monologue on a grave of a young man killed in his first battle. This time we did have even more hard digging into the historical background while making the tracks. We are not singing the songs, we are telling the stories!”
Pre-Order Where Fear and Weapons Meet HERE
1914 is:
9. Westpreußisches Infanterie-Regiment Nr. 176, Hptm. Ditmar Kumarberg – vocals
The 51st Highland Division, 1/9th Bn. 2Lt. Liam Fessen – guitar
307th Infantry Regiment, Capt. Walter Wyhovsky – guitar
Le 151e regiment d’infanterie, Cne. Armin d’Harcourt – bass
K.K. Landwehr-Infanterieregiment Lemberg Nr.19, Obltn. Rostislaw Potoplacht – drums
Share