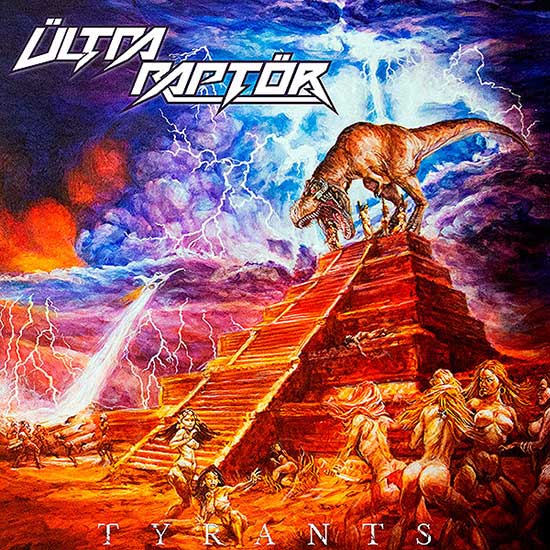 Canadian Speed/Heavy Metal band ÜLTRA RAPTÖR, has just signed a contract with Fighter Records for the release of their debut album that will be titled “Tyrants” which will be released next November 9th on CD, 12″LP, Cassette and Digital formats. To celebrate this signing, of which Fighter Records is especially excited, you can already enjoy the 1st advanced song, as well as the album cover and tracklist.

ÜLTRA RAPTÖR were formed in late 2015 and already in 2017, they released their first EP “Ültra Raptör” on a self-produced way, receiving good acceptance from the underground Heavy Metal scene. In late 2020, the band began recording their debut album “Tyrants”, which was finished in early summer 2021 and immediately led to their signing with Fighter Records.

The style of ÜLTRA RAPTÖR, is a fast and intense Speed/ Heavy Metal, with influences from bands like SAVAGE GRACE, early RUNNING WILD, JUDAS PRIEST, RAGE, EXCITER, early ANGEL DUST, SAVATAGE… where the songs stand out for their cool catchy riffs and melodies, with excellent guitar solos, a relentless rhythmic base and a dynamic vocalist, creating a set of the great potential that will give a lot to talk about.

The tracklist for “Tyrants” is as follows:

The release date for ÜLTRA RAPTÖR “Tyrants” will be the 9th of November 2021 through Fighter Records on CD, 12″LP, Cassette & Digital formats. In the meantime, check out ÜLTRA RAPTÖR official Facebook site here: www.facebook.com/UltraRaptor and listen to a song of the album on the following link:
youtu.be/Z3k3eAbEyDY