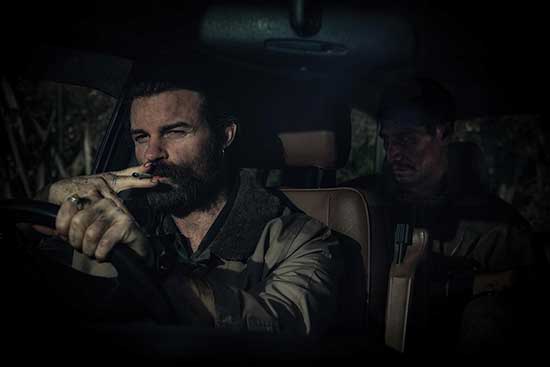 Dark Sky Films Will Release COMING HOME IN THE DARK
In Select Theaters and VOD On October 1st
**Sundance Film Festival 2021 – Official Selection**
“As an exploration of the ways in which childhood damage can manifest as
unfettered evil in adults, COMING HOME IN THE DARK is a rivetingly nasty ride
and an assured debut from a promising new director.”
– David Rooney, The Hollywood Reporter
“I was so shocked I literally fell off my seat, stumbling back and staring mouth agape
at the screen.”
– Kristy Puchko, Pajiba
“A career-changer for star Daniel Gillies… here given the spotlight as an unflappable
but queasily human screen psycho.”

A family’s idyllic outing at an isolated coastline descends into terror when high school teacher Alan ‘Hoaggie’ Hoaganraad, his wife Jill, and stepsons Maika and Jordon unexpectedly come across a pair of murderous drifters​ – ​the enigmatic psychopath Mandrake and his hulking man-child accomplice Tubs​ – who thrust them into a ​nightmare road trip. At first, the family’s terror seems to be born of a random encounter with two sociopaths​, b​ut as the night drags​​ on​,​ Hoaggie and Jill realize that this nightmare ​was set in motion 20 years earlier; and as they approach their mysterious final destination​, ​Mandrake reveals the horrible secret driving his actions​.​
Running Time: 92 minutes
Language: English
Country: New Zealand
Share