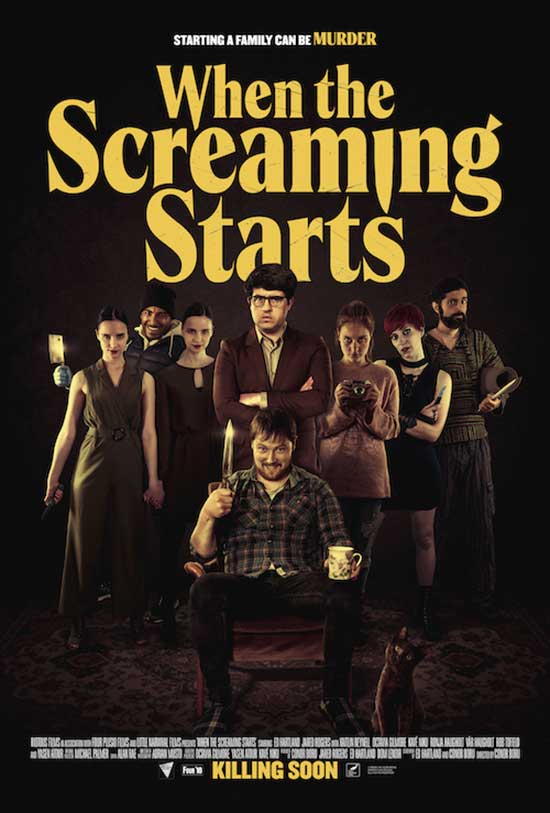 New comedy-horror set for World Premiere at FrightFest this August

Riotous Films in association with FOUR plus10 Films and Little Narwhal Films are delighted to announce that their new comedy-horror mockumentary, When the Screaming Starts, will have its World Premiere at FrightFest this August. Described as “If Louis Theroux met the Manson Family”, the film will debut alongside this year’s most prestigious and hotly anticipated horrors and thrillers at Leicester Square’s Cineworld on 28th August. The film will have two additional screenings, one later that night and another on Sunday 29th.
The film includes Yasen Atour, who will star alongside Henry Cavill in the second season of The Witcher, as well as up and coming talent Ed Hartland (The Crown), Octavia Gilmore (For Sale) and Jared Rogers (making his second appearance at FrightFest following 2018’s Killer Weekend).
When The Screaming Starts marks the feature debut of filmmaker Conor Boru, and was overseen by a production team which includes Dom Lenoir, who directed and produced the award-winning thriller Winter Ridge.
When Norman Graysmith is invited into the home of an aspiring serial killer, Aidan Mendle, he believes he has found the subject for the documentary that will transform his failing career. Initially the production goes well with Aidan freely opening up about his desire to kill, but when his early attempt at committing murder falls apart, things begin to unravel.
Aidan desperately tries to maintain his position as the next Charles Manson by starting a murder cult, interviewing prospective members for what he affectionately calls his “family”. The potential candidates provide a rich tapestry of misfits, from the lost and confused to the (most likely) psychopathic. Events begin to spiral out of control and Norman watches his dreams crumbling around him.A wannabe serial killer, a warped filmmaker, and a murderous cult on a blood-soaked rampage. When The Screaming Starts is a darkly comic tale of how far we will go in order to achieve our ambitions.
Director Conor Boru was thrilled with the news that the film was heading to the prestigious horror festival; “We’re honoured to have our world premiere at FrightFest! The fact that it is in our home city makes it even more special. We cannot wait to share our twisted vision with the ravenous FrightFest crowd!”
When The Screaming Starts will have its World Premiere at FrightFest 2021 on 28th August.
Tickets can be bought here;
World Premiere – Sat 28th – 8.50pm – Tickets here
Sat 28th – 9.15pm – Tickets here
Sun 29th – 1.15pm – Tickets here
Twitter @WhenScreaming
Instagram @WhenTheScreamingStarts
Share