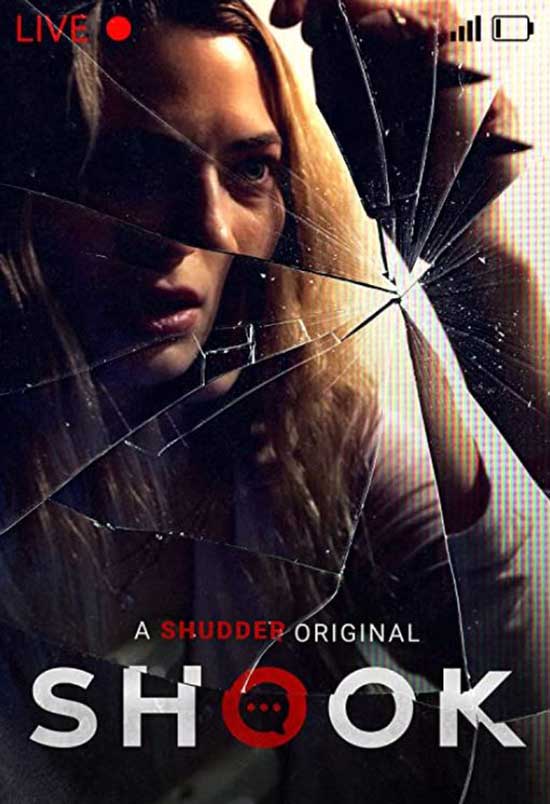 A wannabe social media influencer is stalked by what seems to be a vindictive killer, but becomes shook when friends turn out to be dangerous enemies.

Shook (2021) is a contemporary slasher flick based around a 20-something social media hopeful who skips an influencer party to dog-sit for her ailing sister. Trouble is, there’s a dog-killer on the loose who just so happened to kill a fellow influencer with her own high heel, Barb Wire-style. While one would be forgiven for thinking this SHUDDER channel original film is a straight-forward thriller with some grisly moments, it boasts several plot twists that elevate it above other throw-away “the killer’s already in the house” streaming options.

Shook is directed by Jennifer Harrington (Housekeeper 2015), who also crafted the script from a story concept developed with producer Alesia Glidewell (Look at Me 2012), and both the script and screen aspects are handled serviceably. There are occasional clever visual choices when lead character Mia, played by Daisye Tutor (Play Mate 2021), gets texts or videos, and those are projected behind, around, or somehow played across the scene. It’s nice that some of these, like an occasional video, is practically done using a projector on a wall, which just looks better in a dark-house set than the crisp, now overused pop-up text message bubbles simply appearing onscreen (though there are a few of those, too).

In addition to Tutor, the cast also features Emily Goss, who plays Mia’s sister Nicole, Nicola Posener (Angles Fallen 2020), who plays Mia’s frenemy Lani, and Stephanie Simbari (Lady-Like 2017), rounding out the supporting women as Mia’s friend Jade. Joining as the men on the cast are Octavius J. Johnson (The Wilding 2016) as Mia’s boyfriend Santi, and Grant Rosenmeyer (The Royal Tenenbaums 2001) as the neighbor and possible killer, Kellan.

Everyone does a decent job, but Goss, whose character is suffering from a hereditary and degenerative disease, takes the cake as the strongest on the roster. When she comes up to bat, she carries her scenes with a chilling coolness. Tutor does well, also, but her role seems intentionally shallow, which is likely intended to play off our preexistent assumptions about the vapid social media set. Her character’s “flatness” allows the plot to be front and center, but also makes for an occasionally dull moment where we’re left to watch Mia stare dumbly at her laptop or phone screen. Also worthy of special mention is Nicola Posener, who does a great job showing range as the token Jezebel in the proceedings. Having watched her in 2020’s Fallen Angels, it’s a joy to see her get to work her serious acting chops more fully, even in a supporting role.

As mentioned, the plot of Shook is far more clever than is to be expected of your run-of-the-mill slasher, and it uses that low expectation to get off two legitimate twists that subvert assumptions nicely. I will say that the one is stronger than the other, and yet the climax is focused on the second, less-effective one. Part of its lesser effect is due to the fact that it’s a little drawn out. However, as the film is only 88 minutes long, the slow bits aren’t enough to grind the film’s momentum to a halt. For gore hounds, there’s a particularly nasty leg breaking scene, but most blood and gore is kept to the required minimum, serving only to progress the plot.

All in all, Shook (2021) is another feather in the cap of SHUDDER Originals, and it’s nice to see a more genre-centric source than Netflix or Hulu putting down the bills to make and distribute worthy indie films for the horror community. So, if you’re in the mood for a bit of Scream with a Gen Y coat of paint, then Harrington’s film will scratch that itch.