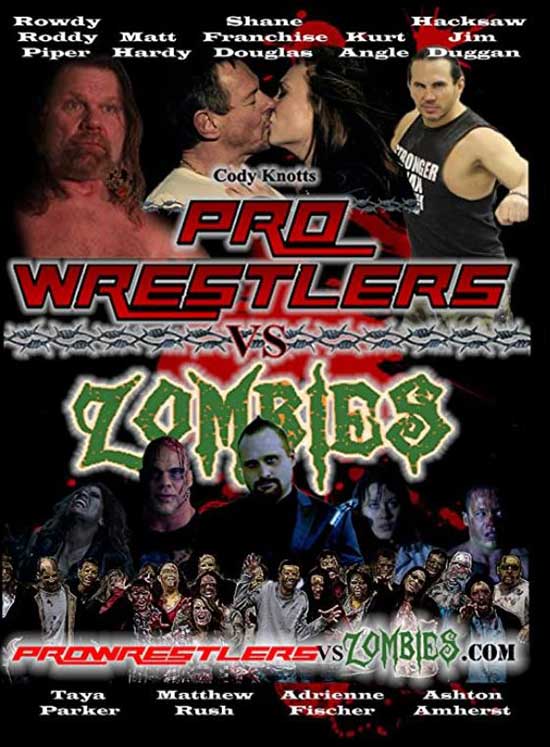 Famous Wrestlers are pitted against hordes of undead when they unknowingly walk into a death trap.

Hey kids! I’ve got something special for you. Today we’re gonna talk about PRO WRESTLERS VS ZOMBIES, a 2014 film written and directed by Cody Knotts.

I suppose the story will come as no surprise – its wrestlers versus zombies. Pretty straight forward, I mean its right in the name. I had heard about this film when it was in pre-production and it took until now for me to finally see it. I wish I had seen it sooner.

The story setup is a bunch of wrestlers take on a private show, an exhibition in an old prison. Its a big fat cash drop so why not? A whole bunch of them sign on since the promoter apparently hasn’t been bothered to pay anyone in a while.

This private gig, however, isn’t what it seems and the wrestlers  quickly figure out they are in some serious trouble. It will take all of their skills, and none of their ego, to get through the night.

There’s more to that but let me get to the real meat of the matter here….if you are or have ever been a wrestling fan, this is the movie for you. Let me just make a quick list of some of the performers you’ll see in this film –

Oh, and there’s more. So many, many more. This thing is chock full of wrestlers, and zombies. Wrestling zombies. Wait, getting ahead of myself…

Ok so here’s the deal. Our bad guy is called Angus (played by Ashton Amherst). He’s pretty cheesed off at Shane Douglas for “accidentally”  killing his brother in the ring during a match. So Angus makes a bit of a Faustian bargain for the power to raise the dead (you know…like you do) and Angus is the money behind this private exhibition. Its all to get his revenge on Shane.

Problem is, Roddy Piper came along too, along with all these other wrestlers. And Roddy ain’t falling for it. Something is rotten in Denmark and Hot Rod won’t rest until he figures it out. 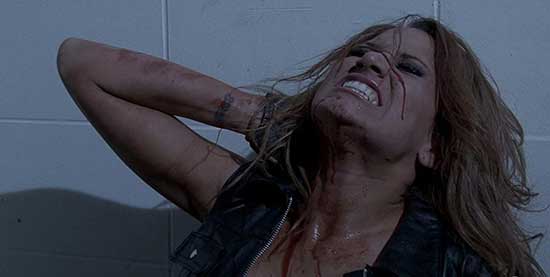 The special effects are not bad, believe it or not. I mean, its a zombie film. Some of the undead are really juicy, while others are super crusty. There’s a lot of variety in the horde which is always a good thing. I hate those cookie cutter CGI zombies that all look exactly the same. That’s just no fun at all.

Fight scenes, yes of course. All these wrestlers means you have a lot of stunt guys on set so not using them would be really stupid. Stage fighting is what these guys do for a living. There are some really good sequences, a few solo fights that are really amazing. Once things get going, the action is non-stop. The real fun is in the fight sequences. That’s what we came for, right? And this film does not disappoint in that respect. 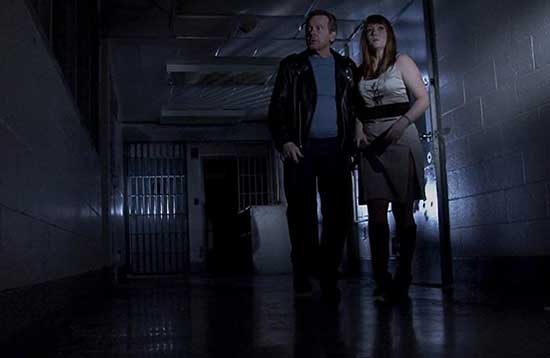 Now I’ll be honest…some of these guys are not actors. So other than Roddy, no real Oscar clips here. And this is Roddy’s last film. He popped up here and there in some other things, but as far as a leading role this was it. He was so very ill during filming and it sadly shows. He’s not at his best, but its still Rowdy Roddy Piper and that’s what matters.

Honestly, my favorite scene in the whole movie is a scene with Roddy and Jim Duggan. No spoilers, but it was so well done by both of them.

And don’t forget to look for all the continuity errors. It makes for a good party game, actually. One of those things that happens in a low budget film, but I swear I think a lot of them in this film were on purpose.

Basically, its like this – if you don’t set the bar too high, if you don’t expect too much, this is a fun film. The title tells you all you need to know. PRO WRESTLERS VS ZOMBIES. Its violent, and gorey, and cheesy, and funny, and totally worth it.