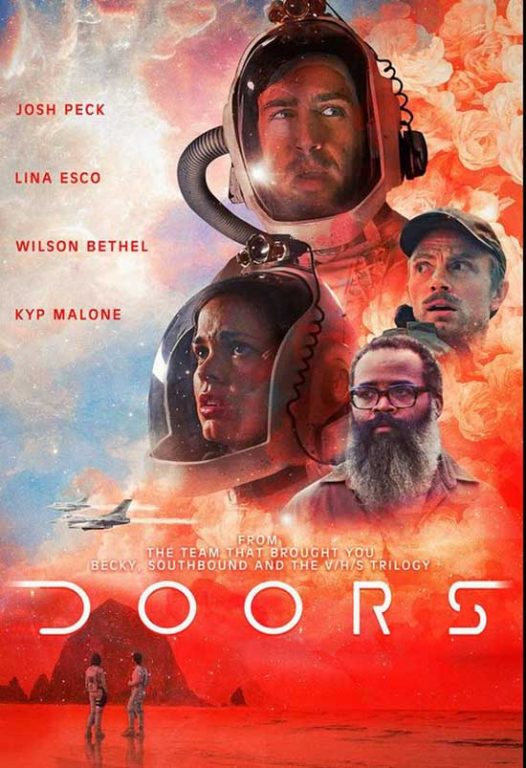 Without warning, millions of mysterious alien “doors” suddenly appear around the globe. In a rush to determine the reason for their arrival, mankind must work together to understand the purpose of these cosmic anomalies. Bizarre incidences occurring around the sentient doors leads humanity to question their own existence and an altered reality as they attempt to enter them.

Kids in detention find their school is suddenly in lockdown with no clear reason why, and the teacher watching over the kids has left the room. Birds are crashing into the windows.

When the clueless kids figure out how to use a free-standing radio with a dial, they realize there is something big going on everywhere. They finally leave their room, only to find an undulating mass is blocking the hallway. Oddly enough, if anyone gets too close to the mass, they vanish into it.

And the mass is talking to them in their heads.

Cut to shots of cities empty, streets vacant, and wildlife at peace. It seems that these objects, named “doors”, have appeared all over the planet. They are causing birds to freak out. They are causing people who go near them to go insane, in certain cases, or violent in others.

Of course, the logical thing to do is enlist civilians to volunteer to go inside these doors and report on the other side. Someone thought it would be cute to call these people “knockers”.

Story two tells us about three knockers who are preparing to enter a door. Two of the characters are in a relationship, and the woman is, apparently, pregnant. Ultimately, the single guy succumbs to a memory of a screwed-up relationship while on the wrong side of the door. The couple work out their relationship issues in a scene that I am sure sounded better in theory than it did on screen, but more about that later. For now, let’s just say that it is a poor blending of “The Twilight Zone” and Hemingway’s “Hills Like White Elephants”.

We are told how the “knocker” program was a miserable failure, and that nearly half of the Earth’s population has vanished into these doors or have died as a result of the effects of the doors.

Story three is about Jamal and his relationship with a door that has appeared in the forest behind his cabin. Instead of reporting the door and staying locked inside as the authorities direct every good citizen to do, Jamal has been attempting to communicate with the otherworldly entity. We catch up to him on the day the door decides to respond. His first thought is to contact a colleague that he has more than casual feelings for and invites her out to meet the door.

Being rude and inconsiderate, she brings along her boyfriend without notice, and he is a twitchy, obnoxious sort. Being a jerk, he calls the authorities about this rogue door, and all hell breaks loose.

“Doors” feels like a politically-correct indoctrination film. It pushes gender identity, female empowerment (by way of a phallic symbol, ironically), violent white cops, and, finally, acceptance of “a new way”. People are told what to do and when to do it, for their own safety. Put total faith in your leaders. Don’t question, and just accept the new order.

All of that would be fine if the script could weave it all in with more subtly than a sledgehammer. Or maybe give us characters who don’t make the audience cringe or groan in disgust at how dull and transparent they are. Throwing sudden slow-motion scenes, drone shots, and fancy light filters on top of these shortcomings to give the movie an air of being artistic only drives home how weak the foundations of the film really are.

Mild spoilers here:  To clarify things, let’s look at the second story. The woman feels she is like the rocks on the shoreline – never moving, yet being endlessly altered by other forces, like the waves and time, both of which come and go as they please. She compares her lover to the waves.

Her only option to “free” herself? Why, by killing her lover, because she cannot take responsibility for herself and her life direction any other way, seemingly. In fact, to drive the point home, she shoots THREE versions of her lover, but leaves alive the version who basically apologizes for existing and making her life miserable. How in hell are her failures in life HIS responsibility? But that is where “Doors” seems to have its head.

“Doors” is a slow, dull, and preachy film loaded with barely adequate performances and a script that might work better as a pilot for a limited-run series for Netflix to crow about on Twitter, but only for those who feel permanent lockdowns are the best medicine. Check it out at your own risk.