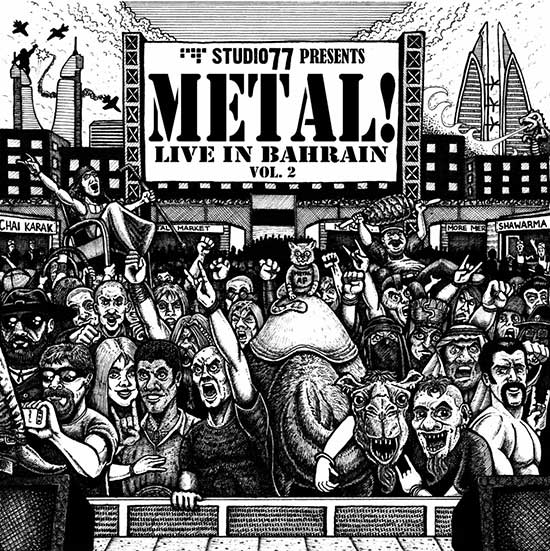 Metal! Live in Bahrain Vol. 2 is the second installment of the series featuring the best original music from the Arabian Gulf’s heaviest bands. Volume 1 was released in December 2019, the first live metal compilation album to come out of the region.
The project was put together by Hani Taqi of Studio 77 Bahrain who recorded and mixed all the songs. The album contains 73 minutes of live music from 4 bands loud and proud, recorded both before and during Covid in 2019-2020, and represents the best of the underground metal scene in the region. Metal is alive and thrashing in Bahrain.
The rest of the world might not know a metal scene exists in Bahrain, or even where the tiny island is on the map, but this compilation aims to show the rest of the planet that there’s a thriving metal scene in Bahrain and plenty of killer bands putting out original music. And what better way to showcase a metal band than by capturing them doing what they do best, slaying it with a live audience?
The majority of the live performances on the album were also filmed and the videos will be released on YouTube during the summer of 2021. Follow Studio 77 Bahrain on Facebook for more details.
Metal! Live in Bahrain Vol. 2 is out now! Check out this devastating live album to listen to these distinctive destructive sounds and support the extreme metal scene in the Middle East!
More info:metalinbahrain.com/metal-live-in-bahrain-vol-2
Hellionight:
www.facebook.com/hellionight
Ryth:
www.facebook.com/rythbh
Lunacyst:
lunacyst.com
Necrosin:
www.facebook.com/Necrosin.BH
Share