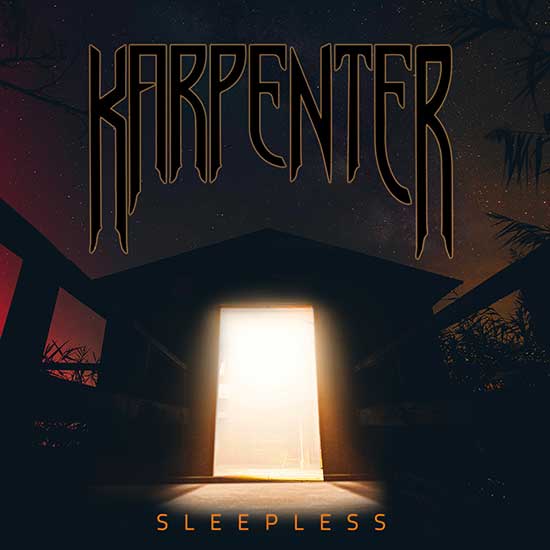 New Album “Sleepless” Out May 28th

KARPENTER (named in tribute to horror master John Carpenter) will be releasing their debut album “Sleepless” on May 28th via Rockshots Records. The album will be a gateway to a hostile and tormented world, where space and time are perceived in a distorted way. Each track hides a story, and a tale steeped in fear all inspired by horror movie themes and characters such as “Perfection Valley” for Tremors, “No Vacancy” for Alfred Hitchcock’s Psycho, “Shark” influenced by Jaws, and “The Manor” for Army of Darkness.

With just a few days until the full-length is unleashed, these horror fiends are sharing their latest music video for “Mechanical Sense”, which is inspired by the horror video board game Atmosfear. It’s a fast and impactful track that speaks of demonic possession as a metaphor of the inability to manage choices and actions in everyday life.

“This song is here to make a clear point: we can play hard and heavy if we want. “Mechanical Sense” is like a fast train running with no rails and boundaries. It is clearly a speedy metal song filled with stunning melodies and majestic mid-tempo openings. It’s a no-brainer when it comes to the power of sound and it is so funny to play! ” adds the band.

KARPENTER was formed in 2019 by former Fightcast members Filippo Tellerini, Francesco Vicini, and Marco Biondi, along with Federico Conti (Creep), Manuel Nucci and Michele Mingozzi (Figure of Six). By connecting old-school influences with modern-sounding songs, the band aims at keeping the core of the style that characterized the past while projecting itself toward new and original experimentations of sounds and metal sub-genres. KARPENTER‘s members have shared the stage with established bands such as The Dillinger Escape Plan, The Ghost Inside, Poison The Well.

Their forthcoming debut “Sleepless” was recorded and mixed by Gabriele Ravaglia (Extrema) and Gianmarco Bambini at Fear Studio in Italy, and mastered by Jacob Hansen (Volbeat, Epica, Fleshgod Apocalypse).

For fans of In Flames, Amorphis, Machine Head, and Mercenary, “Sleepless” is available for pre-order via Rockshots Records.

Album Credits:
– All music and lyrics by KARPENTER
– Recorded and mixed by Gabriele Ravaglia and Gianmarco Bambini at Fear Studio, Italy
– Mastered by Jacob Hansen at Hansen Studios, Denmark
– Artwork by Nomad by Fate