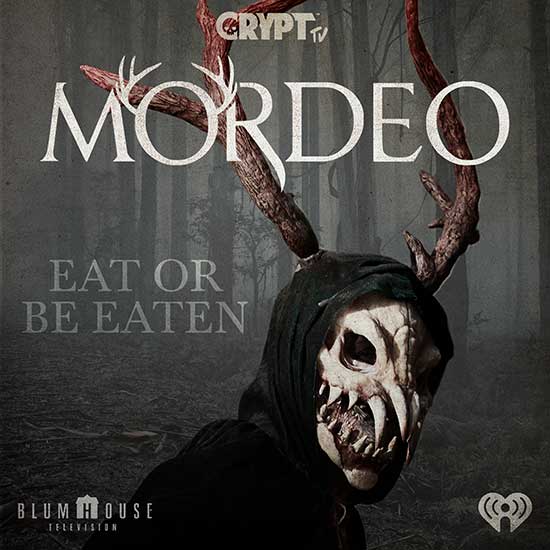 iHeartMedia, the No. 1 podcast publisher globally, today announced “Mordeo,” a new iHeartRadio Original Podcast co-produced with Blumhouse Television and Crypt TV. The 10-episode scripted thriller directed by Alex Kemp will recount the tale of two brothers who disappear in the Monongahela Forest and will follow Isaiah Williams, voiced by J. Alphonse Nicholson (P-Valley, Just Mercy), the lone survivor, as he emerges from the forest starving, disoriented and traumatized one month after his disappearance. Nicholson garnered a 2021 NAACP Image Award nomination for Outstanding Supporting Actor in a Drama Series for P-Valley.

Listeners will be catapulted into the terrorizing world of The Mordeo, a ravenous, bloodthirsty creature, as Isaiah grapples with his harrowing experience in the woods and his darkest secret threatens to turn him into the very monster he thought he left behind. “Mordeo,” produced in association with Wolf At The Door, will premiere on June 2 with new episodes releasing every Wednesday. Listeners can hear the official audio trailer now on iHeartRadio and everywhere podcasts are heard.

“‘Mordeo’ serves fans of horror more of what they love. Crypt TV is an extension of the Blumhouse family and it was a natural fit to help expand their storytelling into a new medium with proven partners like iHeartMedia,” said Chris McCumber, President Blumhouse Television.

“Crypt is thrilled to expand Mordeo as a podcast and there is truly no better creative partner for Crypt’s first adaptation in audio than Blumhouse and iHeartMedia. Mordeo is one of Crypt’s biggest IPs and I’m so excited for Crypt fans to see one of our favorite monsters in a new medium; and for genre and audio fans everywhere to experience all 10 episodes of this show,” said Jack Davis, CEO Crypt TV.

“We’re thrilled to be partnering with the brilliant creative minds at Blumhouse and Crypt TV to bring this captivating, haunting story to life,” said Will Pearson, COO of the iHeartPodcast Network. “Both are masterful storytelling teams, responsible for so many of the best horror movies and television shows in existence. It’s been a genuine pleasure to pair their expertise with our own and we’re excited to see what audiences think of this latest thriller.”

The new show is part of the larger strategic partnership between iHeartMedia and Blumhouse Television announced in October 2019. Under the deal, the two companies are collaborating to develop and produce scripted podcasts across the horror genre, ranging from suspenseful thrillers and murder mysteries to science fiction audio-plays. Previous collaborations include “Aaron Mahnke’s 13 Days of Halloween,” an immersive horror podcast narrated by Keegan-Michael Key.

Mordeo is one of Crypt TV’s biggest intellectual properties with over 35 million views across Crypt’s YouTube and Facebook channels. “Mordeo,” the podcast, with Blumhouse and iHeartMedia marks the first adaptation of Crypt IP into audio. The original Mordeo was directed by Ben Sottak. Episodes written by Katelyn Crabb and co-produced by Sottak. Daniel Persitz oversaw production on behalf of Crypt TV.

“Mordeo” is distributed by the iHeartPodcast Network. Listeners can visit iHeart.com/apps to download iHeartRadio and listen to the official trailer today on their favorite device.