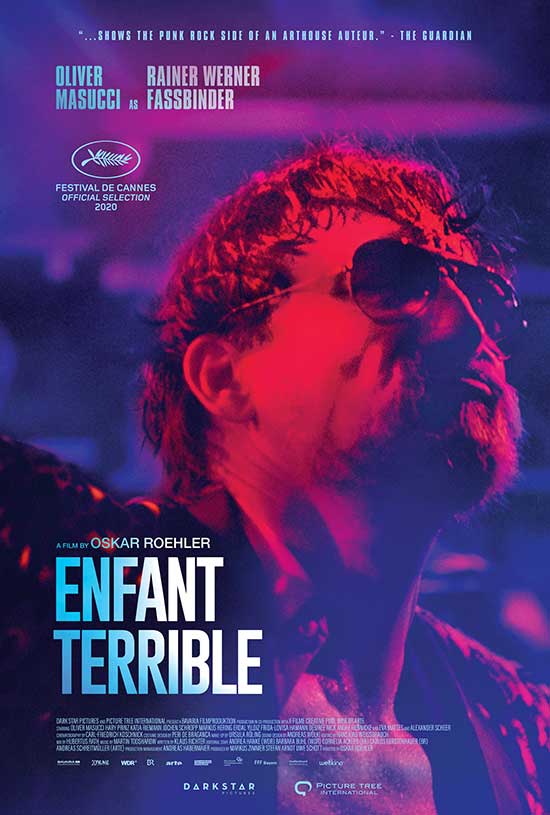 ENFANT TERRIBLE, BASED ON THE LIFE OF NEW WAVE FILMMAKER RAINER WERNER FASSBENDER, RELEASES IN THEATERS FROM MAY 7 FROM DARK STAR PICTURES

ENFANT TERRIBLE, the biopic of iconic German New Wave director Rainer Werner Fassbinder, commences in select theaters this May – June from Dark Star Pictures.
From director Oskar Roehler, and starring Oliver Masucci, Hary Prinz, Katja Riemann, and Felix Hellmann, ENFANT TERRIBLE had its world premiere at the 2020 Cannes Film Festival.
This is the story of a child of his time…of an extremely talented and dynamic filmmaker named Rainer Werner Fassbinder, who dreams of making movies about the cold-hearted, archaic Federal German society and about the longing for respect and love of the outsiders – foreigners, underprivileged groups, small convicts. His fulminant rise to being one of the most important directors in Europe correlates with his mental and physical fall and his early death.
May 7 – LA for Laemmle NoHo (physical)
May 14 – Laemmle (virtual) includes New York
May 14 – Cleveland Cinematheque
May 14 – VIFF Film Society Vancouver
May 20 – San Diego FilmOut
May 28 – New Orleans, Zeitgeist Film Center (Physical)
June 23 – Goethe Pop Up Cinema, Seattle
and many more to be announced!
ON DEMAND AND DVD JUNE 15
Share