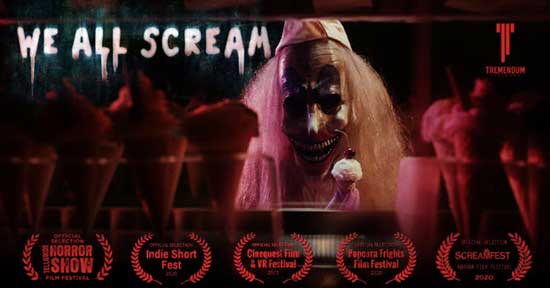 Filmmaking duo Travis Cluff and Chris Lofing, co-founders of Tremendum Pictures, and creators of the horror hits The Gallows and The Gallows Act II, deliver all new screams with the release of their chilling new horror short WE ALL SCREAM, released today on their Tremendum YouTube Channel.

SYNOPSIS
A neglected young boy with a sweet tooth gets more than he bargained for when he receives a special visit from the mysterious ice cream man, Mr. Sweetie, in the deliciously diabolical horror short WE ALL SCREAM, directed by Chris Lofing and Travis Cluff and written by Jener Dasilva. After leaving audiences melting in terror at ScreamFest, Indie Short Fest, Telluride Horror Show, the Popcorn Frights Film Festival (as part of NIGHTSTREAM), and Cinequest, this high-concept horror short is available for viewing today!