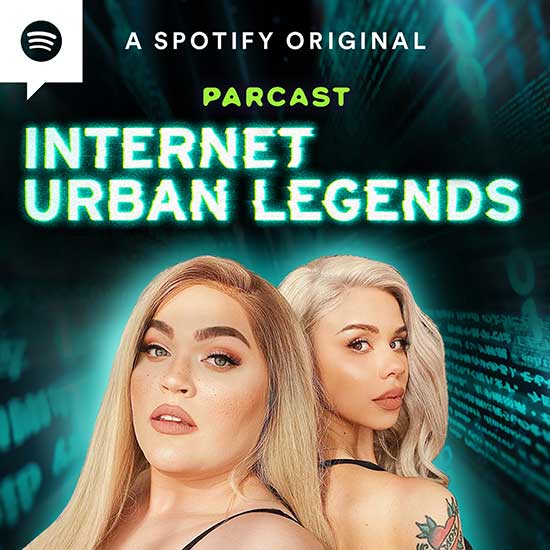 Spotify and Parcast, in collaboration with Wheelhouse Entertainment, have announced their latest Original podcast – INTERNET URBAN LEGENDS – hosted by beauty gurus and internet sleuths Loey Lane and Eleanor “Snitchery” Barnes will premiere Tuesday, April 13. Together, the “Gruesome Twosome” will scour the web for the most chilling unsolved mysteries that have plagued the curious with endless questions. Paranormal and true crime obsessives can follow Loey and Eleanor’s journey into the unknown as they investigate the Internet’s biggest mysteries in search for the truth.

Loey Lane (who grew up in a haunted house herself!) is the resident evidence expert, and Eleanor Barnes is the skeptic and brings with her questions, reactions, and lots of personality as they both set out to take Ghoulies into the spookiest corners of the Internet.

Each episode, Loey and Eleanor take a deep dive into one big story – from terrifying TikToks like Tyson Chandler’s stalking encounter to “The Watcher House” in New Jersey where someone is haunting the family’s new home all the way to the childhood-ruining Disney legend that no one ever dies at Disney. They will investigate clues and conspiracy theories that surround the paranormal tale to try to determine if it is a hoax or a haunt. The series premieres with two episodes, followed by weekly debuts after that. Dive into the gruesome details starting April 13th.