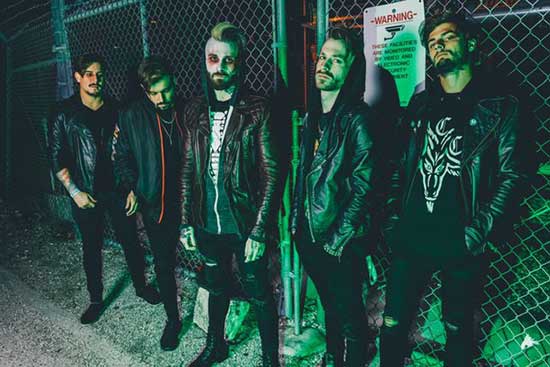 Today, the horror-living metal band We’re Wolves have released the debut single from their upcoming album titled, Evil Things, set for release on October 14th, 2021. The album is a totality of works based on Dante’s Divine Comedy, featuring the sins that captivate us all. Forged from the fires of the inferno, the album takes the listener on a journey through the underworld of hell both sonically and lyrically. The video for the debut single, “Wasteland,” premiered on Outburn Magazine, and depicts a spine-tingling murderous escape from gluttony. We’re Wolves explains the concept behind the video:

“‘Wasteland’ is a representation of gluttony. Relating the Layout of the Hellscape in Dante’s Inferno. The deeper meaning behind ‘Wasteland’ involves my daily battle with addiction. The gluttony that lives inside me that constantly wants to hold Dominion over me and send me spiraling towards needles, pills, powder, and alcohol. The song to me represents the gluttonous nature of a struggling addict, fighting to get clean.” – AJ Diaferio

On the release of their forthcoming debut release, vocalist AJ Diaferio states:

“We are proud to announce our first full-length album ‘Evil Things’ — The album is a diverse collection of songs, based on the works of Dante’s Divine Comedy, designed to connect to the sinner in all of us – we set out to deliver a uniquely wild ride from start to finish..” – AJ Diaferio

We’re Wolves is a dark-humored, horror-loving, energetic blend of metal subgenres and hard rock. The band is constantly pushing the boundaries of entertainment through satirical yet theatrically-morbid visuals that play off their carefully crafted aggressive sound. We’re Wolves have conceived their first full-length album Evil Things, a diverse collection of songs designed to connect to the sinner in all of us. Based on Dante’s Divine Comedy, the album takes the listener on a journey through the underworld of Hell, both sonically and lyrically. Forged in the fires of the inferno, Evil Things delivers a ground-shattering debut for We’re Wolves. The album also contains features from Bryan Kuznitz of Fame On Fire and Spencer Charnas of Ice Nine Kills.

We’re Wolves first burst on to the music scene with their cover of Limp Bizkit’s “Break Stuff,” which garnered a huge response for the band, with over 1.6 Million views on YouTube, and 675K streams on Spotify. Their debut single, “Dissonance,” off their EP The Hunger reached over 400k streams landing the band on the Spotify editorial “New Core” playlist. The band has continued to please fans of metal and horror alike with their cover of “Bodies” by Drowning Pool being featured on Spotify’s “Metal Covers” playlist, and the cover of Disturbed’s “Down With The Sickness” has been revered by the original band themselves. Answering the call for new original music and covers alike, We’re Wolves will be self-releasing their debut full-length, Evil Things this year.

Head to Outburn Magazine to check out the Exclusive Video Premiere of “Wasteland.” Evil Things will be out on 10/14/2021