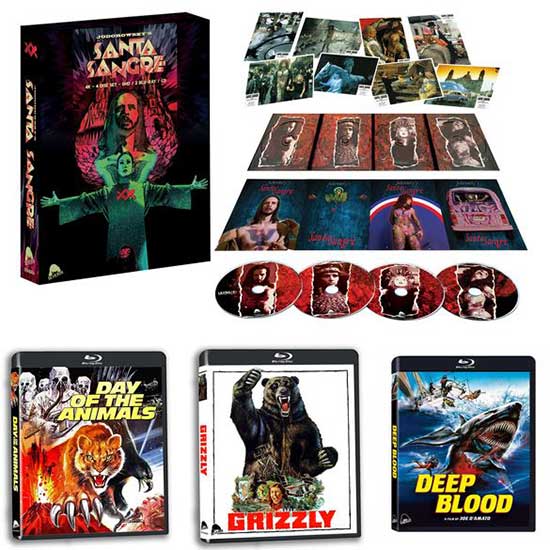 via MVD Entertainment Group
Severin Films’ May neup Includes a Trio of Angry Animals and Jodorowsky’s Epic Odyssey
Fans of “animal attack” films will have plenty of reasons to smile with Severin Films’ Spring lineup. Leading the way are Grizzly and Day of the Animals, two genre classics from director William Girdler. The former is a Jaws-riff about an 18-foot grizzly bear that terrorizes visitors of a National Forest. Cult icon Christopher George stars as the park ranger that goes to war with the massive man-eating beast. At the time of its release, Grizzly earned $38 million worldwide, setting an independent box office record that it would hold for two years before being surpassed by John Carpenter’s Halloween. In Day of the Animals, the destruction of the Earth’s ozone layer leads to increased radiation exposure. Animals exposed to this radiation become highly aggressive towards humans. George once again stars, but in addition to fighting a slew of animals, he is also forced to deal with an unhinged Leslie Nielsen.
Italian sharksploitation entry Deep Blood gets in on the animal madness as well. Dubbed as the “Z movie version of Jaws,” Deep Blood is an ultra bizarre mishmash of genres – even by Italian cinema standards – that could only be helmed by sleaze master, Joe D’Amato. Shot in Florida and Rome, and featuring performances from Charlie Brill and Mitzi McCall, Deep Blood is a deep water excursion not to be missed. Severin is proud to release this lost treasure scanned in 2K from the original negative for the first time.
Finally, Severin presents Alejandro Jodorowsky’s avant-garde classic Santa Sangre in a way it’s never been seen before, with a limited edition 4-disc 4K Ultra HD Blu-ray. It’s a surreal masterpiece about a former circus artist that recently escapes from a mental hospital. Over 8 hours of special features, both new and archival, and an exclusive soundtrack CD make this the ultimate edition of Jodorowsky’s epic odyssey.
Share